YOUTH-LED RESISTANCE AGAINST THE IMMIGRATION RAIDS AND DEPORTATIONS 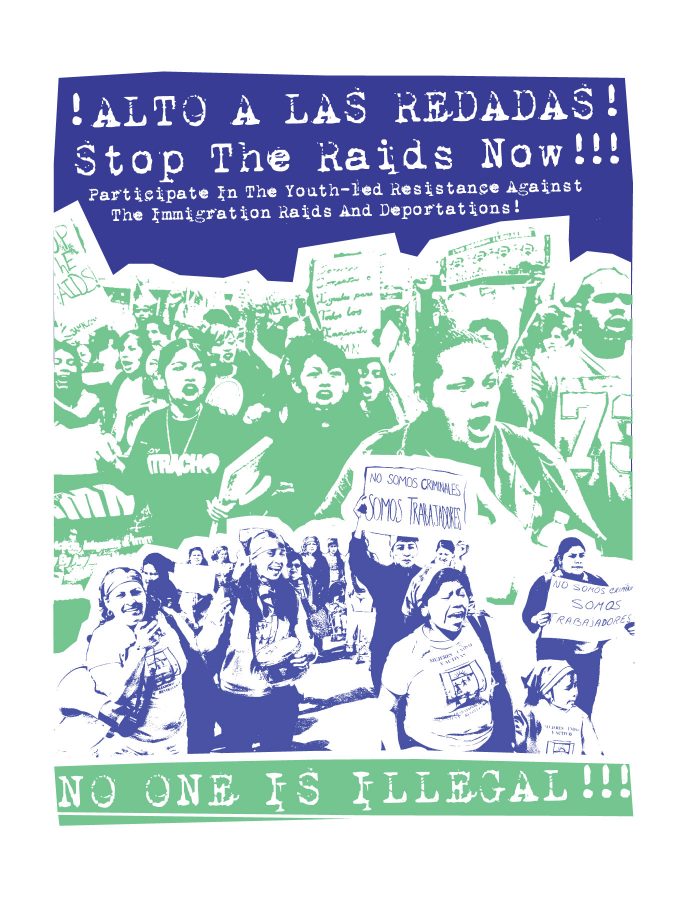 ORGANIZE THE YOUTH-LED RESISTANCE AGAINST THE IMMIGRATION RAIDS AND DEPORTATIONS!

This 2008 year marks the 40th anniversary of the mass mobilizations that were going on globally in 1968. Looking back at the various liberation struggles within the U.S. during that time, we as youth take pride in the organizing efforts of our elders—our communities that paved the way for the present youth to continue that same resistance. We are inspired by the works of freedom fighters from the Black Liberation Movement, the Chicano Movement, the American Indian Movement, in their fight for land, education, justice, peace and self-determination.

Today, we continue fighting to keep what we have won and fight harder for our collective liberation. Giving honor to all those who fought not only for their communities, but for the generations to follow, we have to ask ourselves—Are we justly following in their footsteps? Most of the issues that our elders fought for are still going on today!!

The history of oppression has a way of repeating itself—from slavery to incarceration; from Japanese internment camps of the 1940s, to the immigration detention centers of the 2000s; from the Chinese Exclusion Act of the 1920s, to Prop 187, HR4437, SB2611, Patriot Act and others in our lifetime. The U.S. government has reinvented waves of hate and discrimination that have scapegoated people of color, the poor and working-class immigrant communities.
We have the power and the opportunity to do something about it! We cannot sit back and watch as the discrimination and racism continues to affect our people right before our very eyes. Think about it…

Will the future generations look up to us, as we do the freedom fighters of the ‘60s?
Will we be an inspiration, or a disappointment?

Since the nationwide mobilizations of May 1st 2006, the conditions in our communities have worsened. The repercussions of mobilizing have resulted in more I.C.E. raids than ever before, to instill fear and to prevent us from speaking up against these injustices. In 2007 alone, 276,912 U.S. residents were deported. Families continue to be separated and our communities targeted.

Free trade agreements and foreign policies are still in place as more walls continue to be built to define and secure borders. Natural resources continue to be extracted from our countries while the flow of money crosses borders. Our people are prevented from following work opportunities that have been taken from them in their country of origin.

As a society, we all benefit from the fruits of exploited immigrant labor. More importantly, as youth with the privilege to speak up and in comparison to those who risk everything, we have nothing to lose, therefore it is our duty to do something about these injustices. We cannot go on during our life time without standing up and taking action!

We must stop the second class treatment of our people!

We cannot allow this government to continue to divide and conquer. We must break down the borders that were set up to divide us.

Young people…our time is NOW! Search deep within your soul and ask yourself—What Am I going to do? With the types of injustices going on in society today, nobody should be at peace or oblivious to the suffering of our communities.

We will not let them intimidate us into silence!

END THE RAIDS NOW!!!
YOUTH-LED RESISTANCE AGAINST THE IMMIGRATION RAIDS AND DEPORTATIONS

Join hundreds of youth fighting for our Collective Liberation!

Make this Halloween A Day To Remember!

This Halloween, join a broad and united youth led campaign against the ICE raids and deportations, for an action packed event to expose the inhumane attacks on im/migrant communities. We want to make sure that the news has no option but to report on the repression and violence that many of our families and communities silently suffer. We will not let them intimidate us into passive silence.

10:00am—Gather for music, theater, face painting, banner and sign making, food and more @ Ferry Park Washington btwn Davis and Drumm St. in S.F.
**Get off at Embarcadero Bart**

1pm—Mass Rally, Theater and More in front of ICE headquarters.

REMEMBER TO WEAR BLACK AND SKULL FACE PAINT OR MASKS! Represent the violence done to im/migrants and families in Africa, Mexico, Central and South America, Asia and Pacific Islands, the “Middle” East.
Please contact us ASAP if you would like to participate or donate in any way, big or small. Just send an email to: stoptheraidsnow@gmail.com
We must get involved and stop the persecution and criminalization of economic and political refugees in our cities! NO ONE IS ILLEGAL!!!

Join the Local Organizing in your city
For more information and to get involved email stoptheraidsnow@gmail.com