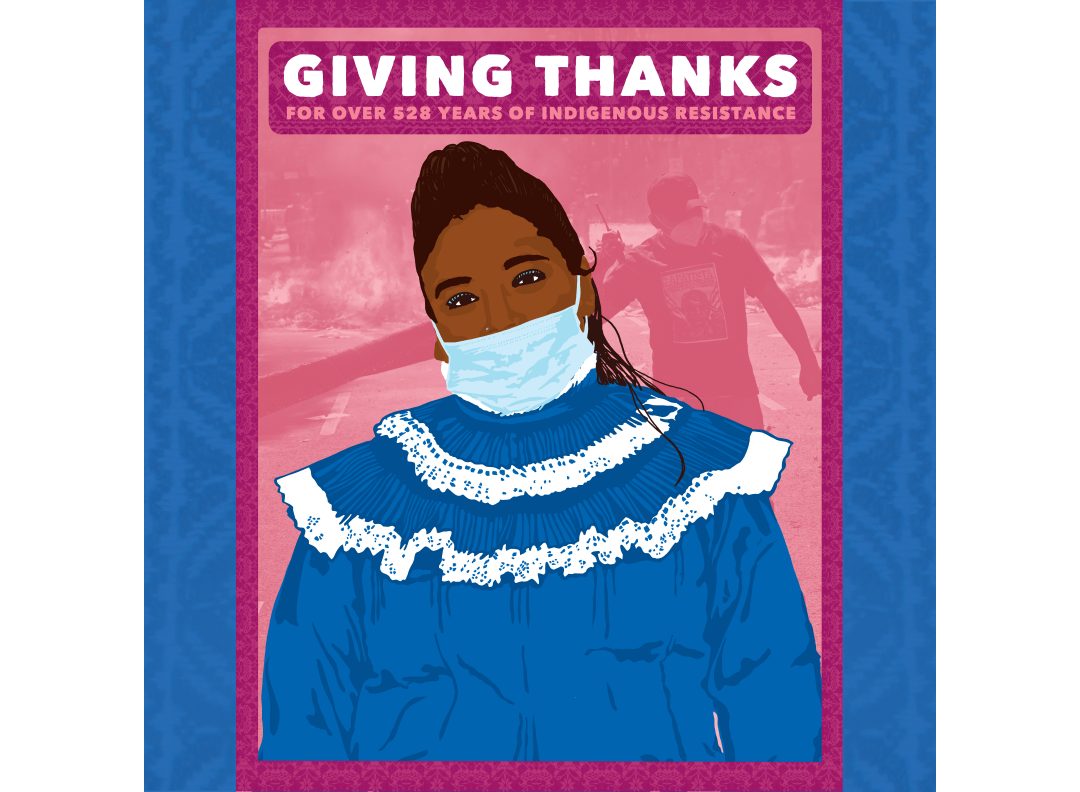 In 2011 we felt so tired of the Thanksgiving narrative & normalization of this day that celebrates invasion and genocide so we started an intentional practice of celebrating Indigenous resistance & resilience.

Now every year, wherever I am at, I take time to remember that despite all of the horrors of colonialism & imperialism that indigenous peoples are still here. Still living, still breathing & still loving. I offer these images as a way to fight against erasure, invisibility & the violence of forgetting.

This year’s graphic is dedicated to the Otomi families who have taken over the National Institute of Indigenous Peoples in Mexico City demanding an end to the continued government violence & neglect against Indigenous communities during the pandemic.

Verónica Margarito (pictured here) heads one of the families that on October 12th took over the building of the organization that is responsible for the policies & programs that are supposed to guarantee Indigenous people their rights. The Otomi accuse the NIIP of serving transnationals & financial capital to legitimate the exploitation and dispossession of Indigenous people & their lands in order to execute megaprojects of death that represent modernity.

We stand in solidarity with the Otomi who demand an end displacement, exploitation and death to Indigenous people. On November 24th Verónica dressed up in her traditional dress that was a gift from her family in preparation to meet with government authorities who decided not to show up. In response to their absence the Otomi set up a fire barricade burning furniture pulled out from inside the building. Veronica and her children helped keep the fire, saying “Let’s see if now they turn up to see us,” as she threw another folder in the fire. “Let’s see if they take us seriously.” Their immediate demands are to expropriate & allocate three properties in the Roma and Condesa neighborhoods for indigenous housing, guaranteed health and education to the Otomi community during the pandemic. Thanks to Carlos! Photos and reporting by Carlos Acuña @esecarlo on twitter.