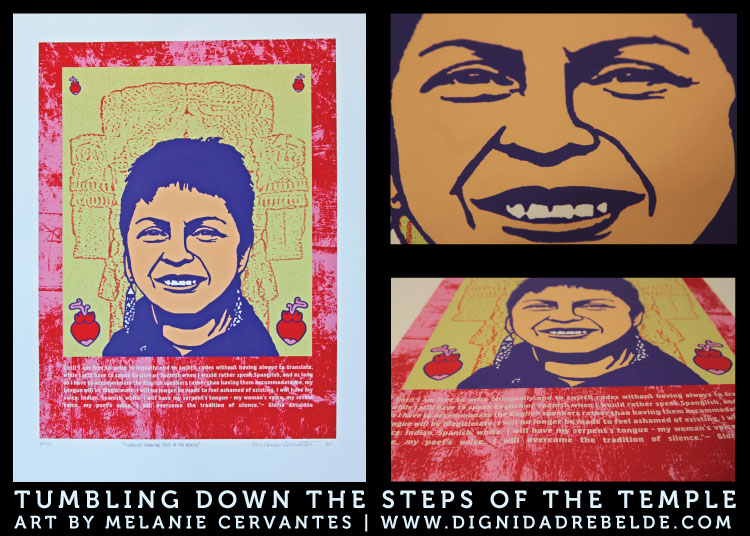 I was recently invited to participate in the Serie Project XIX portfolio. The Project is based in Austin, Texas. When Sam Coronado founded the Serie Project in 1993, he envisioned a workshop where underrepresented artists could benefit from collaboration and learn the serigraphy technique.  In the last two decades the organization has fostered over 250 artists from different professional levels and ethnic backgrounds, who together have produced a rare and special collection of serigraphs.

Since the Serie Project is based in Texas I decided to include a piece about the Tejana extraordinaire Gloria Anzaldua. I choose to include this portrait of Gloria because she was a groundbreaking thinker of Chicana/lesbian/feminist theory.

She helped make visible the literature and writing of women of color and the US. She was the co-editor of the book This Bridge Called my Back and is best known for her book Borderlands/La Frontera. She made major contributions to Chicana feminist and queer theory and was a huge inspiration to me. She died in the summer 2004 at her home in Santa Cruz and I wanted to do something to honor all she contributed to the world during her life.

The piece honors her legacy by juxtaposing her portrait with Coatlicue the Mexica representation of mother earth. In Borderlands,  Anzaldua writes about ‘the Coatilcue State as a type of “internal whirlwind” which “gives and takes away life”, “invoking art,” and that it is “alive, infused with spirit” ‘(Anzaldúa 68, 88-89).

I included a quote from Gloria that I really love:

“Until I am free to write bilingually and to switch codes without having always to translate, while I still have to speak English or Spanish when I would rather speak Spanglish, and as long as I have to accommodate the English speakers rather than having them accommodate me, my tongue will be illegitimate. I will no longer be made to feel ashamed of existing. I will have my voice: Indian, Spanish, white. I will have my serpent’s tongue – my woman’s voice, my sexual voice, my poet’s voice. I will overcome the tradition of silence.”