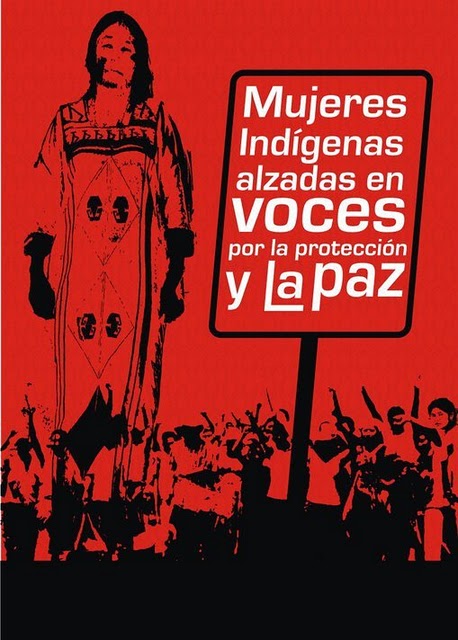 Recently, I was invited to participate in a Transnational Feminist Exchange hosted by the Global Fund for Women and Mills College. There were twenty-five women who participated, the majority of the women were from places all around the world, outside of the U.S. with only a handful of us acting as local reps. It was such a wonderful learning experience. I felt incredibly grateful to be a part of the exchange because as a political artist so much of my work is influenced by the relationships I have with the leaders who are working to make change locally in their communities as well as globally to benefit the world.  We discussed the struggles of balancing the needs of women and communities at the local community level with the major battles against corporate and state power.

One of the compañeras that I met during this exchange works with the Cabildo Wayúu Nóüna de Campamento (Wayúu Women’s Power) in Colombia. The Wayúu tribe is located in the peninsula of northern Colombia. The Wayúu population is the largest indigenous group in Colombia and comprises more than 500 thousand people.
This compañera Karmen Ramírez, delegate of the Wayuu and general secretary of the Cabildo Wayúu Nouna Camp, has denounced the situation in which indigenous peoples are found in Colombia, representing nearly 4% of the population, and has called for greater care and protection by international political authorities. The Cabildo note that while the Colombian government spends 67 percent of its budget on military operations to promote so-called “security,” it is either incapable or unwilling to stem the cycle of atrocities destroying indigenous communities.
Indigenous lands in Colombia are being shaken by global industries whose corporate greed is only motivated by economic gain. Coal mining, oil and gas are the main target of many mega projects that are taking place in La Guajira “by deception and without consulting them.”

Currently, one of the major corporations terrorizing the Wayuu is the El Cerrejón Coal Company which operates the world’s largest open-pit coal mine. It is located in the Guajira department, in the North-East of Colombia. The El Cerrejón company is owned by BHP Billiton (Australia), Anglo American (United Kingdom), and Xstrata (Switzerland).

According to a Human Rights report “Over the past four decades, Colombia has faced a dire social, political and armed conflict. In this context, it has to be noted that the numerous transnational corporations operating inside Colombia are somehow involved in the conflict, collaborating with public and private security forces, including paramilitary groups, who despite their alleged demobilization, continue to kill and threaten human rights defenders. Transnational corporations are not only abetting human rights violations, they also boost corruption. Failing to respect national and international legislation, these corporations, weaken the rule of law.”

“When the El Cerrejón mine began to operate in 1983, constantly expanding ever since, a process of forced displacements of the indigenous Wayuu and Afro-Colombian communities in the region was triggered. The Wayuu have been present in this region for over 3, 000 years, while Afro-Colombian presence goes back some two hundred years.”

Because the only giants are the Wayúu/ Los Indigenas

Currently, El Cerrejón is advancing an ad campaign where a small boy describes his father’s workplace and how he has to shrink down to miniature size with his co-workers  so they can work in the land of magical giants that extracts “magical stones full of power” (coal). The Cabildo Wayúu Nóüna de Campamento launched a counter campaign using the same framework of “giants” but flipping the ideology of free market fundamentalism on its head and centering indigenous communities, the women who lead them and mother earth, as the powerful forces in the otherwise twisted narrative.  A snapshot of their graphics campaign is included above. It depicts a Wayúu woman who represents mother earth as the real giant in our lives. The center that we should prioritize.You can learn more about their work at their website: http://notiwayuu.blogspot.com/

You can view a video of the work that The Cabildo Wayúu Nóüna de Campamento created that includes the commercial from El Cerrejon-
http://www.youtube.com/watch?v=IQXGHZ43vv0