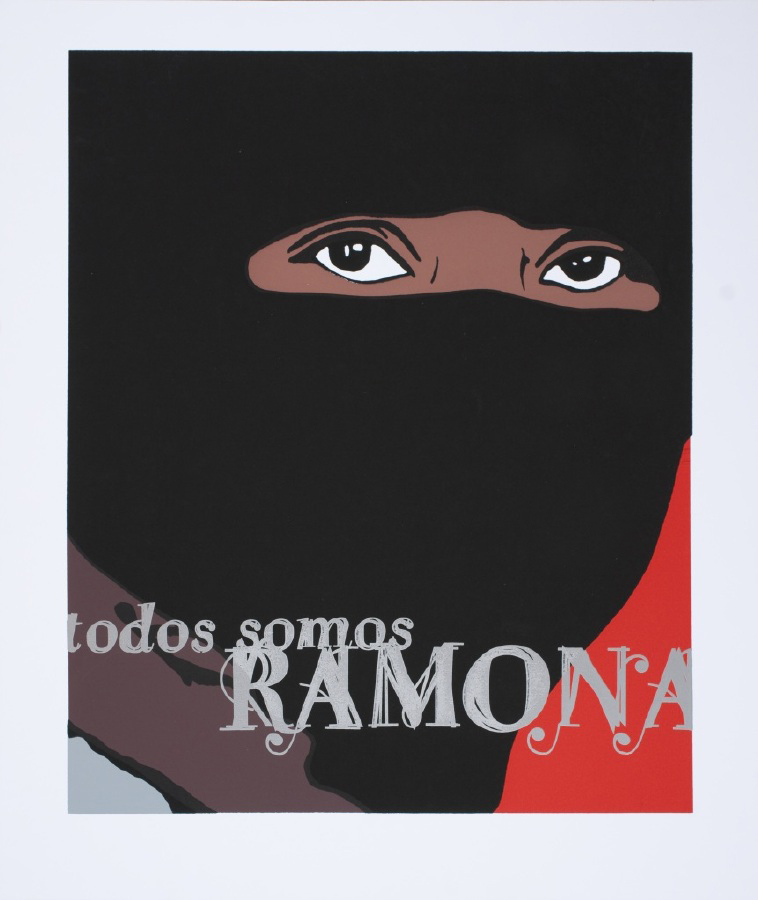 In spring of 1994 i read a newspaper article my sister wrote in La Voz de Berkeley, it was my introduction to the Zapatista movement. It had a picture of Comandante Ramona, who on January 1st, 1994 led the Zapatistas take over of San Cristobal de las Casas and was one of the top leaders of the Clandestine Indigenous Revolutionary Committee until her death in 2006 due to kidney failure. I used the photo from the newspaper article for this print and incorporated the lyrics “Todos Somos Ramona” from a song by Quetzal.

I was very inspired by her role in the EZLN as a top leader, for me she demonstrated what I had learned as an organizer, that as people we had to share leadership between women and men. This structure for us was something we felt was important to do in fighting issues of patriarchy in the work we did in the Bay, to see how this was put into effect in an indigenous revolution was a breath of fresh air. This was the same for all that the Zapatistas represented as a group of indigenous people who were resisting the onslaught of globalization in their communities and told us we should do the same in our community. As Xican@s I saw how inspired we were by the Zapatista struggle and the effect it had on our communities to educate ourselves about globalization and neoliberalism.

For me the Zapatistas were proof that the idea of revolution was not something relegated to the past, but that people around the world were organizing against the policies of neoliberalization and the governments that were putting them into motion. Their work has been a very big inspiration to me over the years, I have made several posters about the Zapatistas, but this has been my favorite piece.