The Art of Politics: Three Generations of Bay Area Printmakers 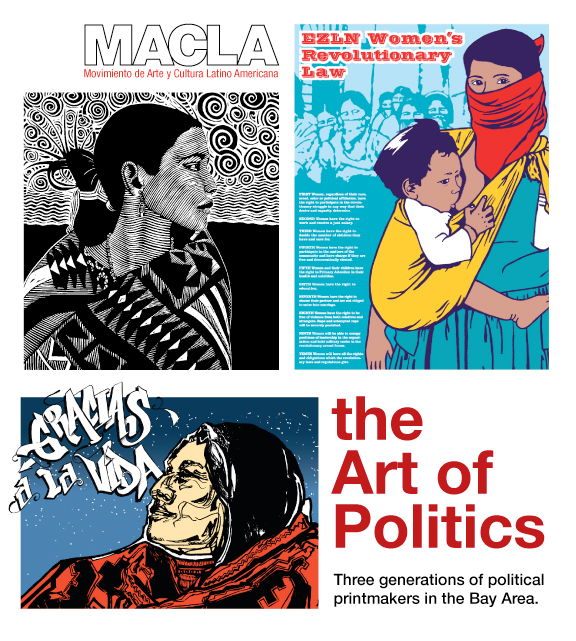 In 1997, Juan Fuentes produced his first linocut after many years as primarily a poster maker and silkscreen artist. Influenced by the social realist tradition of Latin American printmaking (Jose Guadalupe Posada, Leopoldo Mendez, American Artist Elizabeth Catlett and Rupert Garcia) he had been exploring traditional printmaking, in particular woodcut and linoleum techniques. Juan’s focus has continued to be the figure or portrait as a means to tell a story, elaborating on the human condition. The prints that he’s produced in the last two years are of people carrying objects or in the process of work. This carrying of things has been a metaphor for the heavy load on one’s shoulders through experiences of living. Juan has been an artist and cultural activist in the San Francisco, community for over thirty years and a mentor to many young emerging artists. His early poster art is now part of the Chicano Poster Movement. Recently retired and he will be dedicating  energy to creating more art and has launched a new press called “Pajaro Editions” from his home and studio. Pajaro Editions will be part of a larger collective of Chicano/Latino printmakers, called Consejo Grafico, which meets annually. The Consejo,of which Dignidad Rebelde is also a member, works to promote and help sustain our Talleres nationally. Our work has included the development of images for AIDS awareness and obesity in the Latino community.

XOCHITLCEIVE (soh-CHEEL SAY-veh) means flower of self determination or freedom in Nahuatl and Galego. XOCHITLCEIVE features work by Lez DIME Lopez and Natalia FAVI García Pasmanick. We function as a skillshare and collective led by Bay Area muxeres to support grassroots youth organizing and build collaboration and mentorship relationships between young people and artists putting in work for community empowerment.

Franklin Cartagena will be doing live t-shirt printing with images from some of the artists!

Music will be provided byBlackbox will have Mucho Macho Lucha – Our resident drag diva Donna Personna and special guests TurboMex for this rough and tumble tumbia tribute to Mexican Wrestling. They will sing, dance, wrestle and spit fire! Blank Manuscript will be here as well and we have a DJ in the gallery alcove, so there will be music and our typical festive three ring circus for the evening!