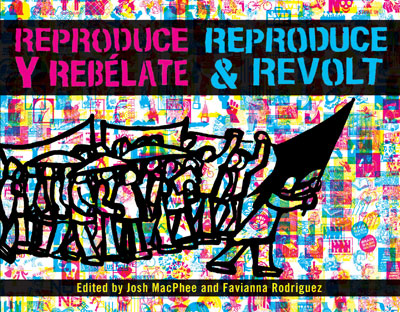 My friends Favianna and Josh have been working on the Reproduce and Revolt book for a while and it’s finally out. This book is done in the spirit of Rini Templeton whose work was released in book form as a free clip art book for the movement. In the same spirit, artists donated graphics for this book to be released to the public to be available for use on movement flyer and posters. I am proud to have a few images in the book, and I hope to see them in a flyer some day.

For more info read below:

An extensive collection of contemporary political graphics collected from around the world, including art from many of today’s most exciting street artists, poster makers and graphic designers. All of these images are granted to the public domain, to be freely used for political purposes.

Street Posters. Graffiti. Bumper stickers. Activism depends on design to capture imaginations and spread a message. Reproduce and Revolt not only documents some of the best activist design work of the past few years, it shows readers how to do it themselves.

Reproduce and Revolt features the work of artists from over a dozen countries. The collection contains hundreds of high-quality illustrations and graphics about social justice and political activism for use on flyers, posters, t-shirts, brochures, stencils, and any other graphic elements of social causes. The graphics are bold, easy to reproduce, and available to reproduce without permission. The book offers clear instructions on how to utilize the images to improve the effectiveness of visual campaigns. It also contains a short history of political graphics, highlighting the vital and powerful role that graphics have played in social movements all over the world – serving as tools to inspire, mobilize, and transform communities.

An unprecedented contribution to contemporary social movements, Reproduce & Revolt highlights how artists around the globe are responding to some of the most pressing issues of the 21st century, including topics such as gender inequality, environmental injustice, prison reform, queer liberation, immigration, globalization, and labor rights. Featuring artists from around the world, including the United States, Mexico, Argentina, France, Germany, and Canada, this collection offers a moving account of struggle, determination, and resilience. Reproduce & Revolt will appeal to art lovers – and activists – of all ages.

ABOUT THE AUTHORS:
Josh MacPhee is an artist, curator, writer and activist currently living in Brooklyn, NY. His work often revolves around themes of radical politics, privatization and public space. He organizes the Celebrate PeopleÕs History Poster Series, in which different artists create posters to document moments in political history. He is also part of the political art collective Justseeds.org. He is the author of Stencil Pirates (Soft Skull Press), co-editor of Realizing the Impossible (AK Press) and his work has been profiled by Clamor Magazine, In These Times, Punk Planet, Utne Reader, and many other publications.

Favianna Rodriguez is an artist-entrepreneur who has helped foster a resurgence in political arts both locally and internationally. Favianna’s posters deal with social issues such as war, immigration, globalization, and social movements. Her work appears in The Design of Dissent (Rockport Publishers, 2006), Peace Signs: The Anti-War Movement Illustrated (Edition Olms, 2004), and The Triumph of Our Communities: Four Decades of Chicano Art (Bilingual Review Press, 2005). She is co-founder of Tumis Inc., a bilingual design studio serving social justice organizations, as well as the EastSide Arts Alliance (ESAA) and Visual Element, both founded to train emerging artists.