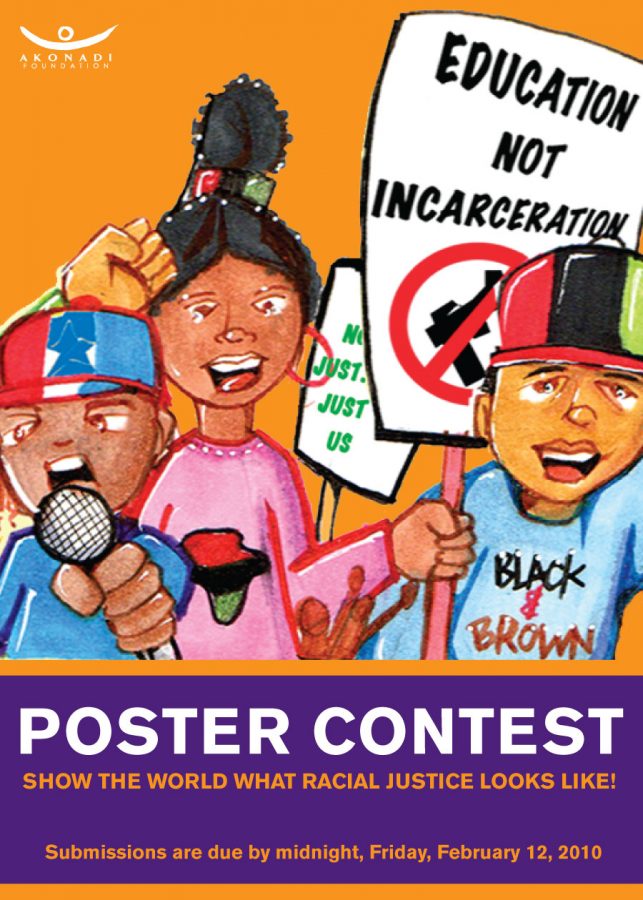 The Racial Justice Poster Contest is a new effort by the Akonadi Foundation to honor racial justice movement building in Oakland and inspire racial justice movement building in communities around the world. The Racial Justice Poster Contest builds on the legacy that the creation of political posters has sparked and nurtured as a part of virtually ever social movement in recent history.

In 2008, the Akonadi Foundation distributed our first Racial Justice poster on March 21, the International Day for the Elimination of Racial Discrimination which commemorates the Sharpeville tragedy. On March 21, 1960, the movement against apartheid was spreading as blacks across South Africa began demonstrating against “pass laws” requiring them to carry identity cards. In the township of Sharpeville, a huge crowd of black Africans gathered peacefully outside a police station, singing and offering themselves up for not carrying cards. The police opened fire, killing sixty-nine people, including ten children.

Akonadi’s first racial justice poster honors the people and organizations who continue to defy such egregiously racist structures and who are committed to building a vibrant racial justice movement.

This first poster sparked the idea of the Akonadi Foundation sponsoring an annual contest that would encourage a creative outpouring of posters that reflect the people in communities of color, their movements and their vision for a world without racism. This year’s poster, “Time for Change”, was selected for its creativity and originality, artistic and design quality, and potential to inspire and inform racial justice movement building.

The artist selected will receive a $1,500 prize that includes $1000 for the artist and $500 as a donation to the Oakland community organization designated by the artist. All entries are due February 12th by 5pm. For more information on the Foundation’s 2010 Racial Justice Poster Contest visit www.akonadi.org.