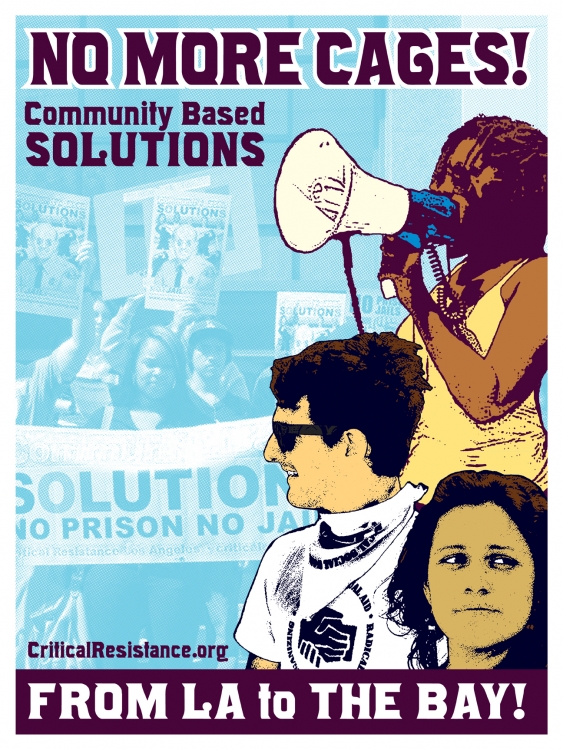 This winter we collaborated with Critical Resistance to create a poster highlighting the work they are doing to end the prison industrial complex and the organizing the do throughout California. This poster will be featured in the Prison Nation exhibit organized by the Center for the Study of Political Graphics, this will be a traveling exhibit and will be shown in six locations in the San Joaquin Valley and the Inland Empire where the highest incarceration rates are concentrated, leading the charge is Kings County in the San Joaquin Valley, where nearly 1 percent of the entire population is in state prison.

Here is more information about the exhibit:

The United States has the largest prison population in the world–over 2.3 million inmates. California locks up more people than any other state in the U.S. and currently proposes to spend billions more to build more prisons and jails across the state

In California, 33 prisons currently house approximately 140,000 men and women at an annual cost of $11 billion. 71% of incoming prisoners are returning to prison on parole violations. Since the 1970s, the rate of most serious crimes has dropped or remained stagnant, yet prisons have been filled at double capacity. People of color, the mentally ill, youth, and poor people are the primary occupants.

The phenomenal growth of the state prison population between 1980 and 2007–from 20,000 to over 170,000 individuals locked up–is due to the war on drugs, mandatory minimums, conspiracy provisions, the criminalization of youth, gang injunctions, a dysfunctional parole system, slashing of social services, inadequate legal representation, and profits made by the multinational corporations building and servicing the prisons.

In that time period California built 22 prisons and one State University–UC Merced.

In California three out of four male prisoners are nonwhite and 64% of women in prison are nonwhite. A large percentage of those entering prison are convicted of non-violent drug charges. Under the California three-strike laws, many prisoners are serving life sentences for petty misdemeanors.
Now under realignment, AB109, prisoners with non-violent, non-serious, non-sexual offenses will be housed in county jails. This is an attempt to relieve the overcrowding in the California’s state prisons as ordered by the U.S. Supreme court. In effect individual counties will be struggling with jail overcrowding and many are proposing jail expansion projects rather than looking at ways to reduce incarceration, fixing the criminal justice system, and putting resources into services and programs that prevent people from going to prison or jail in the first place.

Over the next two years, CSPG will be traveling Prison Nation: Posters on the Prison Industrial Complex, to six locations in the San Joaquin Valley and the Inland Empire.

This project is funded by the James Irvine Foundation and the California Arts Council.