Posters are for the People: An Interview with Jesús Barraza 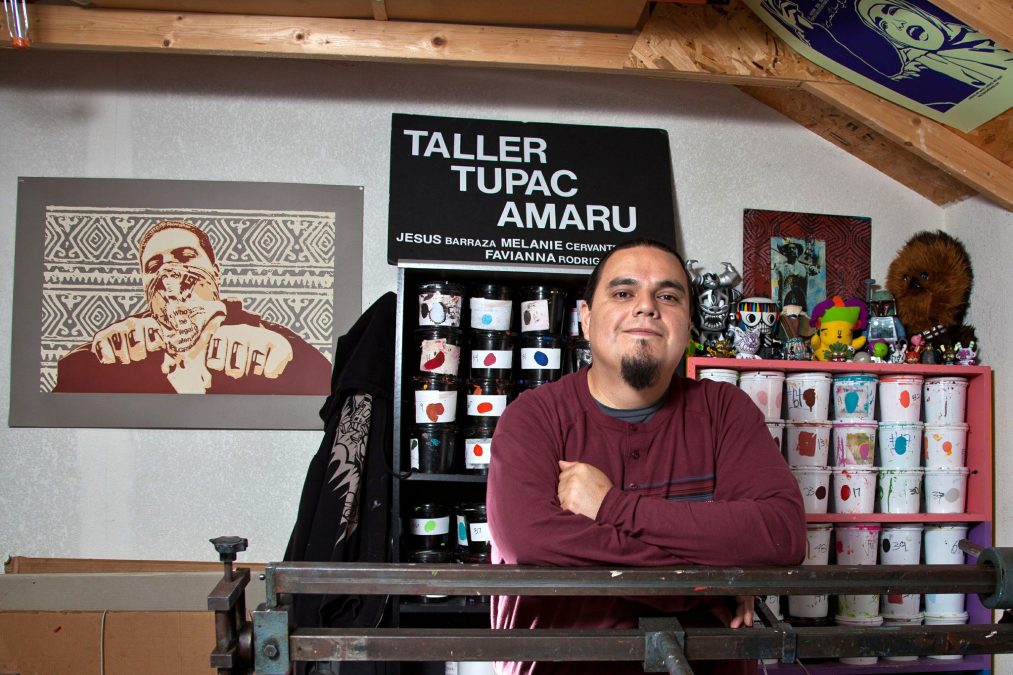 An Interview I did with Ilan Stavans the publisher of the forthcoming book about the Taller Tupac Amaru.

THE ART OF PROTEST, a collection of posters created by Jesus Barraza, Favianna Rodriguez, and Melanie Cervantes of Dignidad Rebelde, is forthcoming from Restless on March 1st.

In the bold screen-printed posters of the Taller Tupac Amaru, such iconic figures as Angela Davis and Emiliano Zapata intermingle with all-caps slogans addressing issues of immigration, police brutality, and globalization. The Oakland-based artist-activists make powerful, relevant images that both reflect injustice and visualize a new future. Through distribution at political demonstrations and online, the artwork returns to the communities that inspired it and spreads throughout the world. Restless Books has gathered the group’s posters for the first time in book form and will publish them on March 1st as The Art of Protest.

Jesús Barraza is a co-founder (with Melanie Cervantes and Favianna Rodriguez) of the Taller Tupac Amaru and a partner with Cervantes in Dignidad Rebelde, a collaborative graphic arts project. Here, he speaks with Restless publisher Ilan Stavans about the creative process and the perennially important question: Who owns art?

IS: Is it wrong for a poster image to go onto a coffee mug, a t-shirt, an eraser?

JB: One of the beautiful things about our posters is that they can end up anywhere and infiltrate whatever space they end up in. The issue is not what surface they are placed on but how they get there. Many times the work we do is used by organizations for fundraisers, or as a special gift for someone, or as a shirt that will be given to all an organization’s members. We love to hear from people about how they want to repurpose the art we make. The problem that can arise is that the artwork can go into another market we did not intend it to be a part of. There have been cases where our images have been swiped from our websites and put onto a t-shirt for sale on CafePress. In cases like these we have no idea who is taking the image or where the profits from these sales are going. There was another case where I saw my image used on a pair of homemade earrings without permission. It is problematic that a person takes an image and uses it to create a product, but the reality is that they are not making a fortune from doing this but trying to make a living like any other artist out there. It would be nice to be acknowledged for our contribution or be given one of whatever was made from our archive, but in this postmodern world, where appropriation is such a part of our daily lives, it is hard to control this and stay on top of how our images are being used. I think the best we can hope for is that people who take the images we make have the best intentions in what they are doing and respect the message behind the images.

Does poster art get the respect it deserves?

Yes and no. As a popular art form, posters lead many lives. Sometimes a poster is on the streets for marches or rallies. That same poster can later end up framed in a gallery as part of a contemporary art exhibition. The issue is that as a popular art form the poster’s primary audience is not in the gallery or museum; posters are for the people. This means that a poster deals with contemporary issues in a way that makes sense to the community it reflects. This doesn’t always make sense in the art world. A poster might be considered too representational and thus inappropriate alongside other artwork that turns the realities of globalization, migration, and temporality into abstractions.

Do posters need to be signed by the artist that creates them? Can they be anonymous?

A print needs to be signed to certify its authenticity, to serve as proof that the artists who created the print authorized the printing of the edition. But if someone does not care about issues of authenticity, there is no need to deal with signing a print—especially if one’s primary concern is putting the work into people’s hands. Historically there have been people who haven’t concerned themselves with signing their posters. There was something political about this decision. It was almost as if it did not matter who made the poster; its existence was enough to verify its authenticity.

In the digital world, are posters mutating into a virtual existence?

With Facebook, Instagram, Tumblr, and Twitter, posters have taken on a digital life; they are no longer tied to physical existence on paper. Now they become people’s profile pictures or a status to share; they are a way for people to express how they feel about something happening in society. Sometimes the image has a physical manifestation, a poster that is offset- or screen-printed; sometimes these are given away at rallies or marches. The digital version serves as a way for people to connect their online persona with the issue. Other times the image only lives online and serves as a quick response tool for artists to show solidarity and express their support for a cause.

What is your advice to the young generation of poster makers?

When I first started designing posters I just went for it and tried not to overthink it. I just kept making stuff, and that’s what you have to do: make as much work as you can. At some point you start to get a handle on what you are making and develop a way of working that suits you best, so your aesthetics get tighter. When I think back to the pieces that I made early on, I feel that those were some of the best pieces I have ever made. I felt a freedom then that I will never be able to regain.