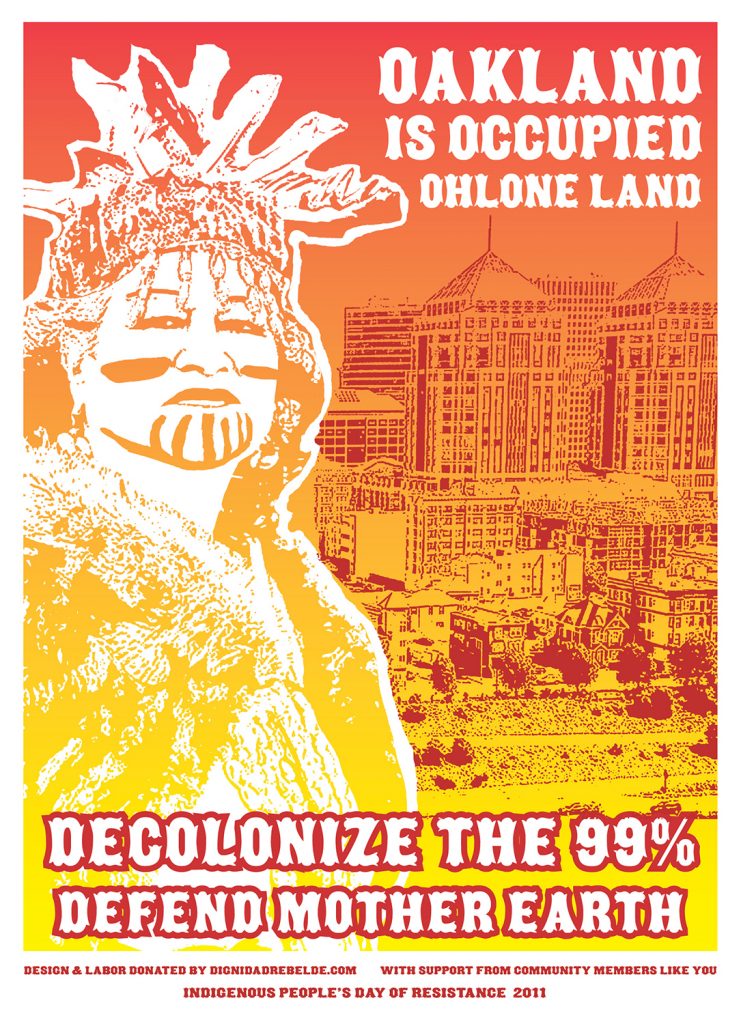 DOWNLOAD A COPY OF THE POSTER BY CLICKING HERE

A new design for this upcoming launch of Occupy Oakland and Indigenous People’s Resistance Day.

I am really excited about these local efforts popping up all over the country. I believe in our insurgent energy and know it will take a massive movement to defeat imperialism, corporate colonialism, and racism here in the belly of the beast as well as throughout the world.

I also believe Occupy” actions need to center a racial justice analysis into their process and demands if they want to truly reach transformational outcomes.Let’s grow and be clear about who we are focusing on (imperialism/capitalism/financial sector) but let’s decolonize ourselves along the way.

In that spirit I support the launch of Occupy Oakland and commend its first steps in asking Ohlone’s people for their blessing in starting this work.

Special honoring for the defenders of Sogorea Te, the sacred site at Glen Cove

MC: Lakota Harden -Event will be simulcast on KPFA 94.1

At 12 noon on October 10th, following the annual sunrise gathering on Alcatraz Island, Elem Pomo representatives and supporters will deliver a letter to millionaire developer John Nady at the Emeryville headquarters of his electronics business, urging him to stop the desecration of Rattlesnake Island.

Located on the eastern end of Clear Lake, Rattlesnake Island has been the ceremonial center of the Elem community of Southeastern Pomo Indians for thousands of years. The island was stolen from the Pomo in 1877, when it was deeded to settlers as private property in a supposed “clerical error”. Ever since that time, the Elem Pomo have been fighting to regain their traditional ownership of this sacred land, which is now privately held by John Nady.

With blatant disregard for the wishes of the Elem people, John Nady is attempting to build vacation homes on the island, and has already illegally installed a septic tank, and thousands of feet of roads, trails, and utility trenching. He has now strong-armed his way out of conducting the required environmental impact report and is poised to begin further construction at any moment.

Join us on Monday October 10th 2011, Indigenous People’s Day, to demand that Bay Area millionaire businessman John Nady immediately halt his planned desecration of Rattlesnake Island. All are welcome, including children, to come out in support of the Elem’s struggle and tell Nady that from the Bay Area to Lake County, people will stand up in opposition to the desecration of this sacred site.

Supporters are also encouraged to join a growing boycott of Nady Electronics products.

In solidarity with OccupyWallStreet, OccupySanFrancisco and Indigenous People’s Day.

On Monday, October 10, 2011 at 4pm the people of Oakland will occupy Frank Ogawa Plaza. This action will unite Oakland with OccupyWallStreet and people around the country and around the world to establish a democratic public space for discussion, celebration and change.

The discussion that began on Wall Street on September 17, has swept across the country, spreading from New York City, to Boston, Boise, Pensacola, and Honolulu. This occupation will add Oakland, CA to the growing list.

Activities and actions will include the establishment of a public garden, teach-ins, preparation and distribution of community meals, creation of artwork, and music and dance. These activities are in support of this growing national movement for economic equality and justice.

About Occupy Oakland:OccupyOakland is an emerging social movement without leaders or spokespeople, for more information, please join us on Monday, October 10 at 4pm at Frank Ogawa Plaza.