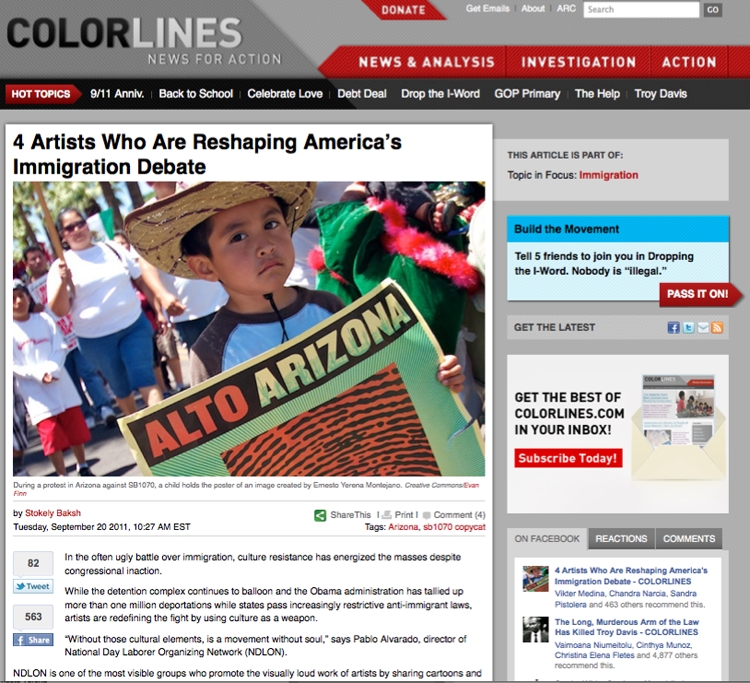 I WAS FEATURED ON COLORLINES.COM  ALONG WITH SOME OTHER REALLY AWESOME ARTISTS. GO TO READ HERE.

I am so honored to be included in Stokely Baksh’s article on artists who are redefining the immigration debate through art on Colorlines. I have read Colorlines, starting when it was in print form, since 1998.

I grew up in Los Angeles in the South Bay in a little city named Lawndale. In order to find a copy of Colorlines at a local news stand I would have to go to a neighboring beach city called Redondo Beach. It was so ironic because my experience in the city could be summed up as a long list of interactions with racist beach goers and residents. The message was clear. Brown folks are not welcome here.

So this September when I read a recent MALDEF (Mexican American Legal Defense and Education Fund) update about how the 9th Circuit Court of Appeals affirmed the district court’s decision on Comité de Jornaleros de Redondo Beach v. City of Redondo Beach.  I was quite pleased.

The MALDEF update went on to state:

The precedent-setting decision strikes down the City of Redondo Beach’s anti-solicitation ordinance as a “facially unconstitutional restriction on speech.” Citing “well-established principles of First Amendment law,” the en banc Ninth Circuit concluded that the city’s “Ordinance fails to satisfy the narrow tailoring element of the Supreme Court’s time, place and manner test.”

Today’s decision sets a strong precedent on day laborer rights and stands as one in a line of successful cases brought by MALDEF on behalf of the rights of day laborers in the Ninth Circuit over the last dozen years. MALDEF represents the plaintiffs, Comite de Jornaleros de Redondo Beach and the National Day Laborer Organizing Network (NDLON), in the case.

NDLON is the organization that has helped highlight the work of artists like myself as because the know “culture resistance has energized the masses despite congressional inaction ” to reform the policies and practices that are negatively impacting brown communities.

It reminds me that racial justice needs to reach every corner of this country and that we need to use every tool we have to say “we will not tolerate racism today or any other day.” Colorlines shaped my consciousness as I was coming into it, it helped me realize that I would love pursuing a degree in Ethnic Studies and that I wasn’t alone in my desire to see structures of racism crumble away. These structures can’t be moved unless the people who reproduce them, everyday, change to. This is why I make art. Because we have to move people too.

Today the words of 19th slavery abolitionist and Unitarian minister Theodore Parker ( Dr. Martin Luther King, Jr. often used this quote and is often mistakenly is attributed for it) ring truer than ever ” The arc of the moral universe is long, but it bends toward justice.”