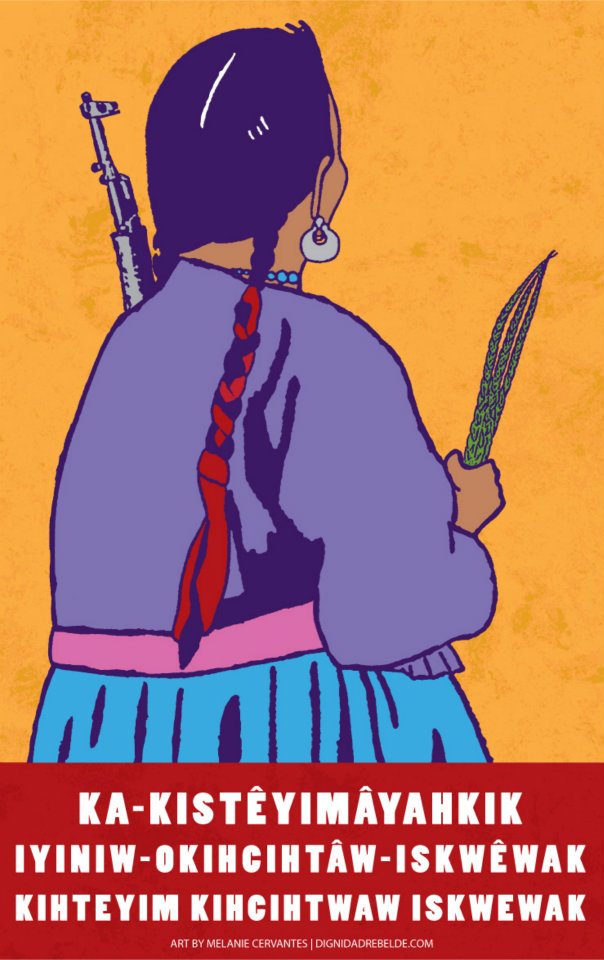 I was recently commissioned to create a new twist on my Indigenous Women Defending Land and Life print. I rarely like to alter my art but I liked the message that the organizers of “Indigenous Sovereignty Week-Edmonton – Occupied Amiskwaciwâskahikan” at the University of Alberta wanted to use. The new text reads:

I also changed the corn in the woman’s hands to sweet grass because this week of events is being held to the north, in  Canada,  in Cree Territory.

For information on the event visit the website by clicking HERE

A Sharing Circle: Indigenous womyn and men sharing the stories of the Indigenous Womyn who came before us and who paved the path for Indigenous Rights today. Who are they?? Where do they come from?? Who are the descendants of these warriors??

In Club Native, Deer looks deeply into the history and present-day reality of Aboriginal identity. With moving stories from a range of characters from her Kahnawake Reserve – characters on both sides of the critical blood-quantum line – she reveals the divisive legacy of more than a hundred years of discriminatory and sexist government policy and reveals the lingering “blood quantum” ideals, snobby attitudes and outright racism that threaten to destroy the fabric of her community.

The screening will take place at 6:00 followed by discussion led by a panel.

PANEL: History of Corporate & Economic Interests and Involvement in the colonization of Turtle Island.

Indigenous peoples in Canada, the United States and throughout the Americas hold valuable land and water resources that have long been exploited by the provincial, state and federal governments and by corporations trying to meet the energy needs of an industrialized world.

Indigenous peoples have disproportionately suffered impacts due to the production and use of energy resources – coal mining, uranium mining, oil and gas extraction, coal bed methane, nuclear power and hydropower development – yet are among those who benefit least from these energy developments.

Authors of Our Own Stories: The Fiction of Anti-Racism Experts

APIRG Presents –
IN COLLABORATION WITH INDIGENOUS SOVEREIGNTY WEEK.
Panel: Junetta Jamerson, Jacqueline Fayant, and Tina Bernard
This discussion is a conscientious and true analysis of anti-racism work within the non-racialized, non-profit sector, based on the lived experiences of racialized women. We will delve into a meta-analysis of the subtle undercurrents or unconscious stereotypes that find their way into everyday inter-office “power-over” relations, policy and structures. We will scrutinize the soul-destroying nature of unconscious racist and sexist beliefs within hierarchical models. We will use a macro-analysis to dissect the debilitating effects of appropriating cultural knowledge and community for ethnic-specific funding within non-profit sectors – funds spent with no accountability back to the ethnic communities they profess to work “with”
Next steps: A guided discussion on solutions that would offer true change within the anti-racism work or within any organization that wishes to instill a “power-with” paradigm, where there is an equal distribution of power and prosperity.