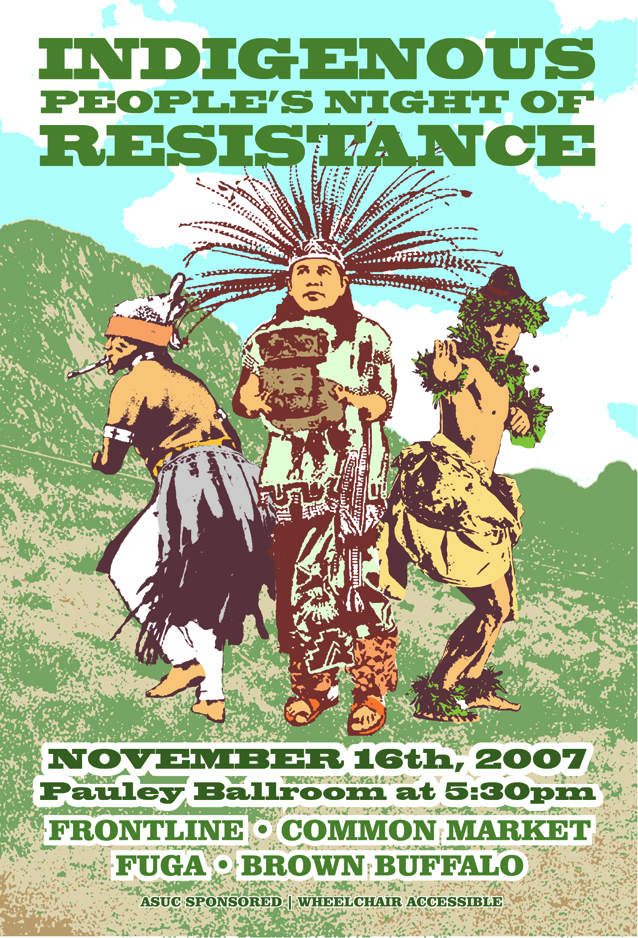 Last year some campus and community organizer friends invited me to help organize an event for Indigenous People’s Day. The event was a combination of consciouness raising and celebration. The annual NIght of Cultural Resistance that students of color on campus organze provded the framework for Indigenous People’s Night of Resistance. I painted some big banners about the Intifadas in Palestine and the resitance in San Salvador de Atenco. These banners would be the first two of a series highlighting successful movements of resistance. It was nice helping organize all the art that was on display that night.

When I received a call from a member of Students for Hip Hop asking if I would design the flyer for the 2007 event I was excited. I asked if Jesus and I could collaborate on the design and they said yes. So we began to talk about the project and decided to use the concept we had been talking about since we came back from Hawai’i. Jesus found a paper on how hula became politicized. I became intrigued by the idea of how indigenous people connect to the land and tell their stories through their danzas and thought about the parallels between hula dancers, Mexica danzantes and Pomo dancers. The result of the concept development and design can be seen in the pictures of our design.

“we drum the land with our feet…”