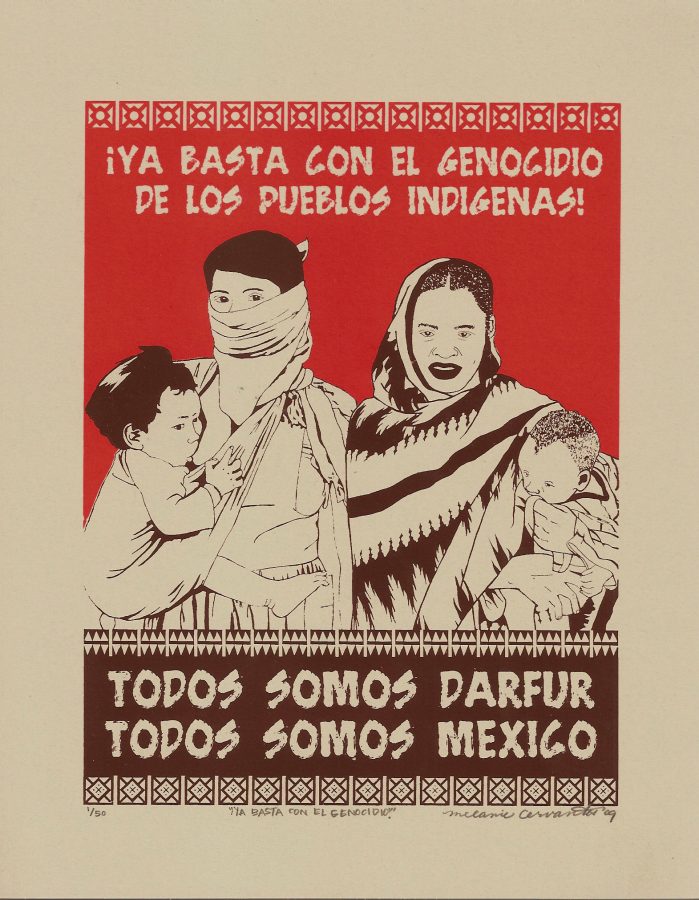 With just a couple days left of the Bush regime’s eight years of terror I can’t help but celebrate along with the rest of the world who have felt the mighty weight of his imperial presidency.  I thought Quetzal’s You Must Die lyrics would be an appropriate way to celebrate.

Last August I was part of a caravan of artists from the United States that went to Ecatepec, Mexico to participate in the Festival de Nuevos Vientos. As part of my participation in the festival I designed four different posters with the intention of wheat pasting them in public spaces and exhibiting the pieces in community centers.

Before I started working on any of the pieces I wrote out my purpose for participating in the Festival. I wanted to use the privilege I have as a Xicana artist traveling from the US into Mexico to carry stories of “Third World” peoples with me.

“Ya Basta Con El Genocidio” is one of the pieces that I developed in order to connect the struggles of the Indigenous peoples  of the Americas who identify politically as Zapatistas with the Indigenous African/Sudanese people who are struggling to survive in Darfur. Global neoliberal policies and practices of predatory planning and development not only displace Indigenous peoples but perceived them as less worthy than other human beings, as expendable.

As we enter into 2009 I see people filled with fire. People fueled by rage and love. This is the fuel that movements need and movements are what change the world. What we need us a revolution in dominant values and practices. We need a world that values humanity and the world’s living beings and which cares for mother earth. We need a world where we learn to live sustainably.

What gives me hope in these days is not the Inauguration of another man constrained by a large and destructive political system instead I find hope in the  enduring love and humanity of the people in the streets of Oakland, the streets of  Gaza, and the communities in Chiapas and Darfur.