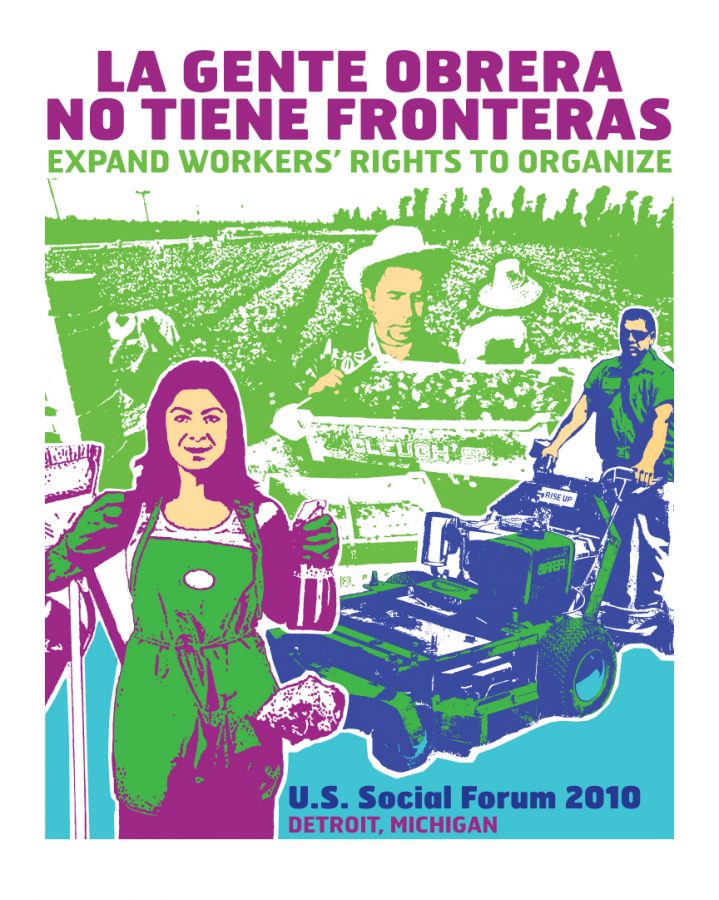 As Jesus and I started to gear up to go to Detroit next week to participate in the US Social Forum, we decided we wanted to create a special print to take with us. As we talked about what we were excited about, we thought of the the Excluded Workers Congress. We talked about racist and classism, how it was for certain sectors to be excluded from the Depression era-National Labor Relations Act.  These excluded workers have decided that enough is enough and that they should have their right to organize recognized.

The poster is a composite of portraits that were created for a local affiliate of the National Day Laborer Organizing Network and the National Domestic Workers Alliance (both of which were formed at the US Social Forum in Atlanta in 2007.)

EXCLUDED WORKERS’ CONGRESS
Event Date: Wed, 06/23/2010 – 1:00pm – 5:30pm
Event Location: Cobo Hall: D2-15
Full Description:
This PMA focuses on how we can expand workers’ rights to organize. It will bring together workers who are excluded from the right to organize and other labor protections in the United States, for discussion on organizing strategies and the potential for reforms to strengthen workers’ rights and democracy through the expansion of the right to organize to include all workers. We seek to bring leaders from the various sectors, including domestic workers, day laborers, restaurant workers, taxi drivers, farm workers, workers in the right-to-work-for-less states of the South, welfare/workfare workers, formerly incarcerated workers, and guest workers, together, to share conditions in our industries and learn from one another’s experiences organizing. In addition, we seek to identify potential for collaboration, campaigns, and a common agenda for reforms at the federal level (including as they relate to the National Labor Relations Act) that could ultimately address the exclusion of our sectors from the human right to organize and collectively bargain.
Organizer Name: Ai-jen Poo
Organizer Email: aijenp@gmail.com
First Sponsoring Organization Name: National Domestic Worker Alliance
Collaborating Organizations:

The National Day Laborers Organizing Network (NDLON) and Jobs with Justice all as a part of the Inter-Alliance Dialogue (IAD). The Inter-Alliance Dialogue involves the following grassroots organizing networks: Jobs with Justice (JwJ), Grassroots Global Justice Alliance, the Right to the City Alliance, Pushback Network, National Day Labor Organizing Network (NDLON), and National Domestic Workers Alliance (NDWA). The IAD represents a broad cross-section of a grassroots sector within the broader social movement Left. The organizations that form our memberships are deeply rooted within constituencies that are grounded in the community and workforce. We are each confronting and organizing strategic responses to the critical demands and intersections of contemporary society and are seeking new approaches to building a national grassroots movement connected to international social change movements.