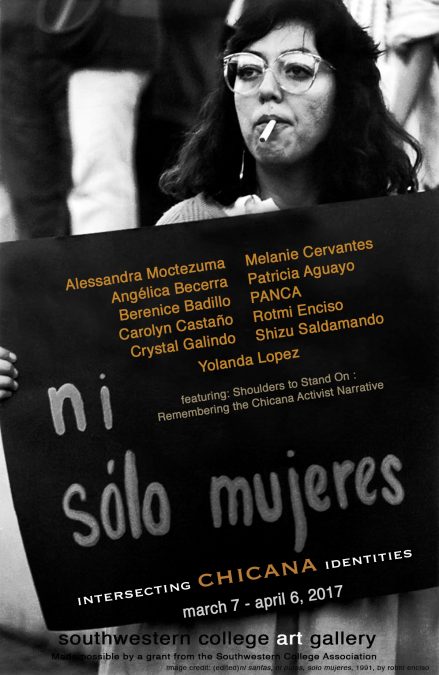 Artwork by ten prominent Chicana artists and one Mexican photographer will be on exhibit as part of Ni Solo Mujeres: Intersecting Chicana Identities, an exhibition commemorating International Women’s Day to be held at the Southwestern College Art Gallery.

Exhibited in conjunction with Shoulders to Stand On: Remembering the Chicana Activist Narrative, a traveling exhibition produced by and shown at the Women’s Museum of California in 2016, Ni Solo Mujeres: Intersecting Chicana Identities will present works by 10 Chicana artists from California. The all women’s exhibition takes as its title Ni Solo Mujeres (Nor Just Women), in an effort to extoll intersectional identities within feminist struggles. It challenges the idea that oppressive dichotomies can only be defeated through homogenous unity and instead presents a collection of work that celebrates the diversity within Chicana identity, and the power that lies in that intersectionality.

Ni Solo Mujeres will open on Tuesday March 7th, 2017 and will be on exhibit until April 6th at the Southwestern College Art Gallery located at SWC Art Gallery/710 Building 900 Otay Lakes Road, Chula Vista, California 91910. An opening reception will take place on March 7th from 11-1pm and 6-8pm and will feature a special panel with Rotmi Enciso and Leticia Gomez Franco on Intersectional Feminisms from 11-12pm. Admission is free and open to the public. Free Parking in Lot O during opening reception only.

Ni Solo Mujeres is curated by Leticia Gomez Franco, who also curated Shoulders to Stand On for the Women’s Museum of California. She is looking forward to this new iteration of an already excellent program and looks forward to pushing the dialogue beyond Chicana nationalism, by highlighting Chicanas who are currently creating work that breaks identity boundaries. An effort that is nothing short of timely; she adds, that the artists participating are a testament, that for women of color, identity is hyphenated a million times over as women living in racialized, sexualized and always politicized gendered bodies. Each artist is living testament that in times like these, our mere existence is revolutionary, and art created from a place of consciousness becomes an ever resounding affirmation of resistance.

The list of participating artists is a first for the San Diego area. Yolanda Lopez, a San Diego native, leading feminist and pioneer of the Chicana movement is best known for her Guadalupe Series, 1978, but as a long time fixture and jewel of the Mission art scene in San Francisco continues to be at the forefront of artists responding to gentrification. Shizu Saldamando, whose work is in the permanent collection of the Smithsonian National Portrait Gallery, and Carolyn Castaño, both Los Angeles based artists recently exhibited at the Venice Biennale. Local artists, Berenice Badillo and Patricia Aguayo have both left their mark as muralists on the pillars of the now historically designated Chicano Park. Also on the roster are San Diego based Alessandra Moctezuma, Tijuana based PANCA, Los Angeles based Angelica Becerra and Oakland based Crystal Galindo and Melanie Cervantes. Also featured is Mexican photographer Rotmi Enciso, who took the iconic protest photograph used as the inspiration for the title of this show.

Ni Solo Mujeres and Shoulders to Stand On will be on exhibit at Southwestern College Art Gallery until April 06, 2017. Gallery hours are Mon – Thurs 10:30am- 2pm and Wed & Thurs 5:30pm – 8:30pm. Exhibition made possible by a grant from the Southwestern College Foundation.