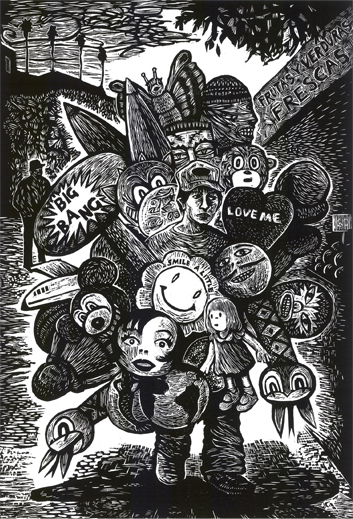 The Taller Tupa Amaru joined the Consejo Grafico in 2006, and since we have participated in meetings, conferences and portfolios all over the country. Through all of these experiences I have had the opportunity to work with some of greatest print studios and this exhibit brinigs  their prints to Bay Area at the Mission Cultural Center.

EN PAPEL showcases the breadth and scope of recently-produced imagery emerging from Latino printmaking studios throughout the US. The exhibit traces provocative delineations of the Latino body politic as expressed through the artists’ reflections of the world(s) they inhabit.

Consejo Grafico is an independent network of print studios that was formed to advance the legacy and viability of printmaking in the United States. The Consejo promotes collaboration as a condition to further the preservation and continuity of the critical/activist orientation that spearheaded Latino printmaking. This network spans the nation and includes works from Texas, New York, Los Angeles, Chicago and more.