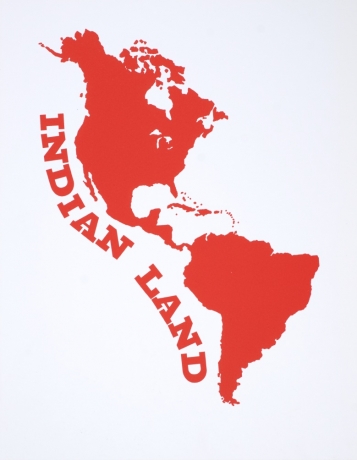 This is a great exhibit I am part of, I was really happy to have them include the “Indian Land” poster. The museum also produced 1,000 offset copies to place by my piece for visitors to take with them.

Counting Coup is a form of prestige, pride and power. “Counting coup” is an expression originating from Plains Indian tactics of intimidation, and an act of bravery that accounts for survival originating from personal victories in non-violent battle exploits. The evidence of confrontation, interaction, and risk encountered through incessant forms of colonization are recorded as experiences and achievements etched in memory, heart and spirit.

Counting Coup considers the maker’s mark as a means of action and recognition through the guise of an exhibition of contemporary constructions that considers honoring, naming and claiming past accomplishments and victories. By keeping score, we are able to identify, witness and memorialize the greater narrative of our presence as a coup to who and where Native peoples are today.

Counting Coup is a stylized divergence from social conventions, expectations and an opportunity to recall interaction with others by shifting energy and summoning a capacity for appreciation and fearlessness. Counting Coup takes into account and unleashes the burden of memory and becomes a bold declaration of indigeneity and assertion of sovereignty.

Counting Coup will include works by artists from the United States, Canada and Australia and range in media; sculpture, paintings, ceramics, textiles, photography, installation, film and video, and poetry.