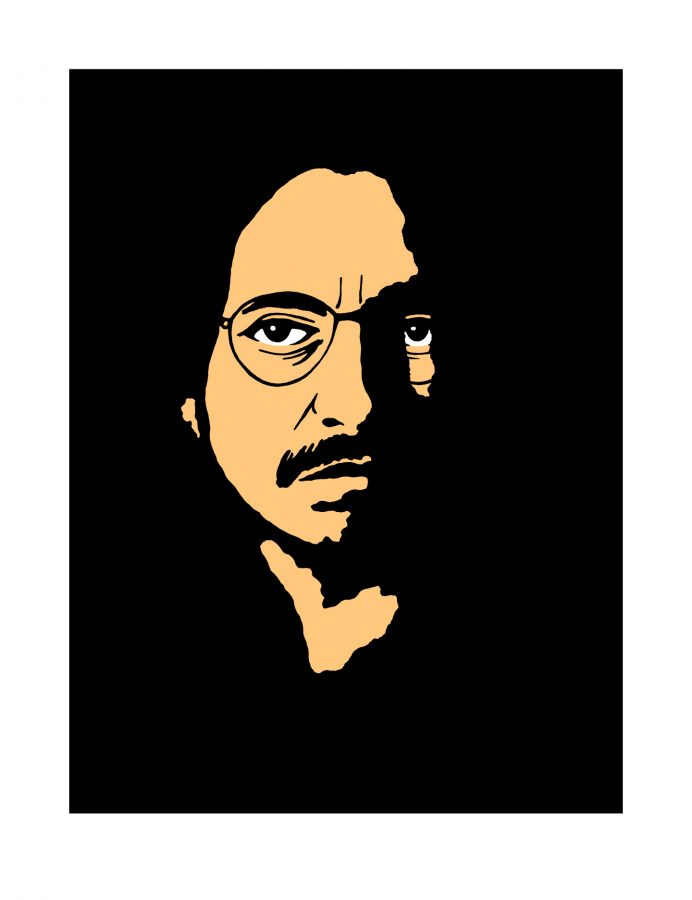 I wanted to share this new print I am working on, I started it in 2006 and recently I found the drawing and decided to finish it. I am making this part of a series of portraits I’ve been working on of artists that have influenced the work I do, this one is of John Trudell. For many of those who do not know about him or his work, Trudell started as an activist and was part of the Alcatraz occupation in 1969 and later became spokesperson of the American Indian Movement through most of the 70s. In 1979 his mother in law, pregnant wife and children were killed in a fire at their home, Trudell believes that his family was murdered by the FBI for speaking out about the treatment of Native people in the US and in particular the case of political prisoner Leonard Peltier. Trudell has continued to be very outspoken about his views about the treatment of Native people by the US government, much of this can be heard in his spoken word pieces.

I first heard Trudell’s spoken word in the mid 90s, my roommate at the time had a couple of his tapes and shared them with me. His poetry expresses so much emotion, there is a lot of rage and sadness in his words, like in “But this isn’t El Salvador”, even now after hearing it 100 times I get teary eyed.

The connection he makes between indigenous people from the North and the South is very important, the same hands that murdered Trudell’s family has murdered hundreds throughout El Salvador and the rest of Central America. It is this kind of thinking that has influenced the way I see the world and the importance of solidarity with all indigenous people who are resisting western civilization and all it’s evils it brings with it. Another favorite piece by Trudell is “Look at us”, it is an indictment of western culture for all the crimes they have committed against indigenous people (play the youtube video below to hear this piece).

For years all I had were bootleg tapes until Melanie got me my two favorites, Tribal Voice and But this isn’t El Salvador, for my birthday a few years back, after he release many of his old recordings on CD. Now Trudell has numerous cd’s available on his website, he also has a couple books, Stick Man is one of my favorite poetry books of all time, and I just ordered his new book Lines from a Mined Mind and can’t wait to read it.