Brother, Can You Spare A Dime? 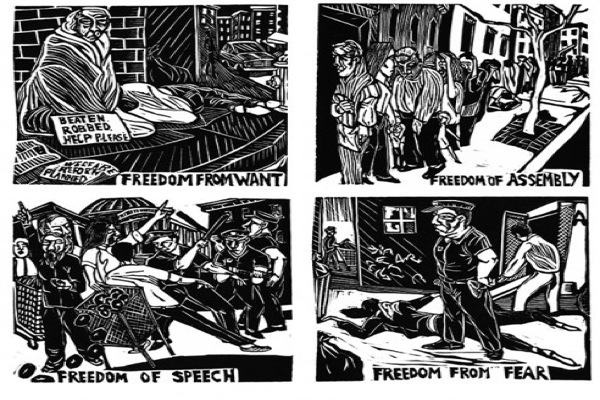 This is a review from poormagazine.org of the Hobos to Street People exhibit. Poor Magazine is a project of the Poor People’s News Network. Artwork by Art Hazelwood.

A Review of From Hobos to Street People: Artists Responses to Homelessness from the New Deal to the Present

They used to tell me/I was building a dream/ And so I followed the mob/ When there was earth to plow/ Or guns to bear/ I was always there/ Right on the job.

“Given the subject matter of the exhibition, we have waived the entrance fee,” said the admissions attendant at the California Historical Society in San Francisco. My friend, and POOR Staff Writer, migrant and poverty scholar, Muteado, and I looked at one another and smiled. We had just spent a good ten minutes complaining about the inaccessibility of “advocacy” art events, the hypocrisy of it all, the high price of entrance, the brie and cabernet passed around in front of emaciated portraits of African children. I applaud “From Hobos to Street People” for making it free to the public, and for much more. The space is big and light, would-be conservative if it weren’t for the art on the walls, the reality in the air. The messages surrounded me and everywhere I turned, in every nook and cranny, I couldn’t escape the significance. This is not an exhibit you critique, you do not remark on the arrangement or the paint color. You learn, you listen, and you walk away with the knowledge that this is truth you cannot ignore. I’m glad there is some sense of catering to the uppity ups of society, because they will come in, and they will be told, and they will know, never will they be able to say that they don’t.

They used to tell me/ I was building a dream/ With peace and glory ahead/ Why should I be standing in line/ Just waiting for bread?

It is fitting that it is being held at a Historical Society. Every piece is a fact, a lesson, founded in the past, driven home to the viewer by informational descriptions, timelines, etc. It has been designed to show us the entwining of 1930’s poverty with the present economic condition, comparing Great Depression images with depictions of a modern crisis. I am always critical of this kind of thing, representations of suffering, stolen imagery to make the artists look better, feel better. This exhibit undid my trepidation and revealed my ignorance, exposing my own hypocritical tendency to judge art for judgments sake, based on an education that taught me how, based on my socio-economic positioning, based on my home. I was humbled before history. Basically, I got told.

I got told how most of the artists represented have been, or are currently, homeless. I got told about The New Deal, the USDA’s Section 515 for rural housing provisions, the Department of Housing and Urban Development (HUD) for urban home creation. I got told how in 1983 HUD’s budget was cut by way over half while city homelessness quadrupled. Thank you Reagan, for all of your infinite logic and compassion. I got told that in 1996 HUD ended all funding for new low-income housing construction, and that in 2008 there were 3.5 homeless, over 1 million being children, 1/3 being veterans.

The show intertwined heartbeats with these numbers, making clear the suffering, the anger, the injustice. Christine Hanlon’s 1998 portrait, “Third Street Corridor,” brings to light duplicitous American icons, such as the shopping cart as the basket of plenty, how it’s turned into a means of economic strategy for poor or homeless recyclers, a place to keep worldly possessions, a tool for the police to bring about theft charges. This picture is held next to Isac Friedlander’s 1932 piece, “Golddigger,” a man digging through a trash can, uncovering the ironies of our vocabulary, from the 49ers to Kanye West.

The pieces, from paintings to photographs, screen prints to posters, are incredibly concise in message and creative in depiction. Dorthea Lange’s famous photographs display the unseen suffering of migrants during the Great Depression. Doug Minkler’s Capitalist Pig driving the cycle of poverty reveals the cyclicity of a destitute society. Robert L. Terrell and Jean Mcintosh’s 2008, “Everyone has a right,” campaign, uses the Universal Declaration of Rights and contrasts them to the stark reality of the streets. Sandow Birks’s “GI Homecoming,” mimics Norman Rockwell’s 1945, “Homecoming GI,” Birk illustrating an amputee veteran returning to a cold and unwelcoming ghetto, compared to Rockwell’s happy and whole soldier returning to open arms, begging the question, are things really that much worse now? Or are our depictions simply more realistic? Jesus Barraza’s significant piece asks the pointed question, how many homeless does it take to start a revolution?

I completed my tour clock-wise, ending by the door with a message that I feel embodies the theme of the event. The economic circumstances and social realities of the 1930’s are strikingly similar to those of the present, the only thing that’s changed is our collective societal perspective on homelessness. The factors that drove poverty then were no less strong then they are now, but the factors are no longer what’s blamed, the people are. The government and media tell us that if you are homeless it’s your fault, you do drugs, you break the law, you don’t work. When FDR stepped forward with his New Deal, he was moving in the direction of making amends for the reality caused by The Dust Bowl, the Stock Market Crash. What are we doing now? Where are these amends made in the Stimulus Package to those evicted or already homeless?

Mr. Barraza answers his own question, 15,000 in San Francisco, is that enough?

Once in khaki suits/ Gee we looked swell/ Full of that yankee doodle dee dum/ Half a million boots went sloggin’ through hell/ And I was the kid with the drum!/ Say don’t you remember?/ They called me Al/ It was Al all the time/ Why don’t you remember?/ I’m your pal/ Say buddy, can you spare a dime?

Brother, Can You Spare A Dime?