The Ballad of Ricardo Flores Magon 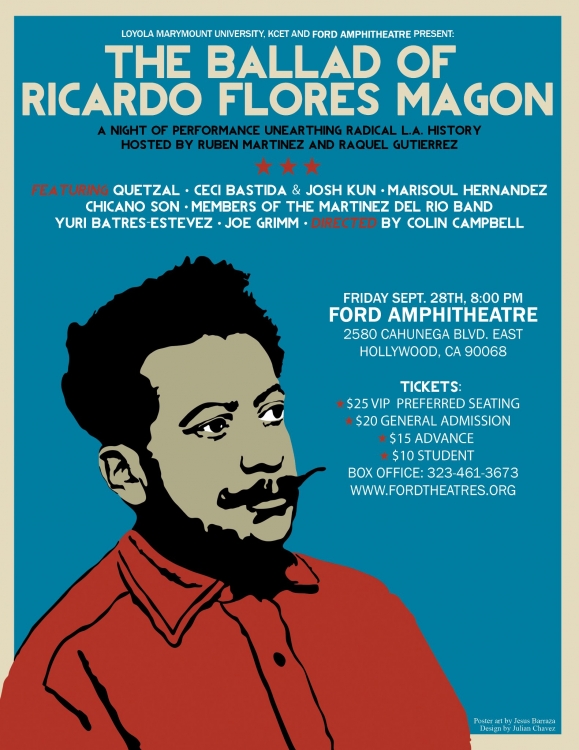 This portrait of Ricardo Flores Magon was designed back in 2001 when i first started screen printing, it’s been used on a AK Press Reader of his writing and now on this cool poster for “The Ballad of Ricardo Flores Magon” an event to honor LA’s radical history with a great line up of bands. I was very honored to be asked to use my art for this poster, I am very inspired by Flores Magon’s involvement in the Mexican Revolution as a thinker and editor for the newspaper Regenaración. I am also a big fan of Quetzal and Ceci Bastida, I wish I was going to be in LA for this event.

More About the Event: Sept. 28, 2012, Live at the Ford Theater: THE BALLAD OF RICARDO FLORES MAGON. A night of music, theater and dance providing a window into a little-known but epic chapter in L.A.’s history, the life and times of Mexican anarchist Ricardo Flores Magón. Based on the old Mexican “variedades” (variety show) format, the show evokes the “progressive” era of early 20th century Los Angeles, where activists gathered at the Old Plaza in Downtown and faced off with their political nemeses: the Los Angeles Times and the LAPD. The performance will be taped for broadcast on KCET as part of its “Live @ the Ford” series. This will likely be our only chance to shoot this story for TV – be part of history! BUY ADVANCE TIX NOW at the Ford Box Office – www.fordtheatres.org