In June i was invited to lead a screen printing workshop at the Ruckus Society’s Action Camp for Migrant Rights that was coordinated with the National Day Laborer Organizing Network. The camp was held at the Highlander Center in Tennessee, a historic space for anti-racism trainings for 80 years, the Action Camp participants represented organizations from all over the country. There was a large contingent of local organizers from Tennessee and through out the south where they are facing anti-immigrant laws.

The screen printing workshop was part of the Arts Track which was made up of Stencil Cutting, Creative Blockades, Banners & Flags,  Screen Printing, Puppets and Theatre. It was fun and educational to work collectively with a group of artists to make this training possible, we created a curriculum that spanned five days and and helped produce a Teatro piece and visual art that has already been used in Anti-287G actions in Tennessee. 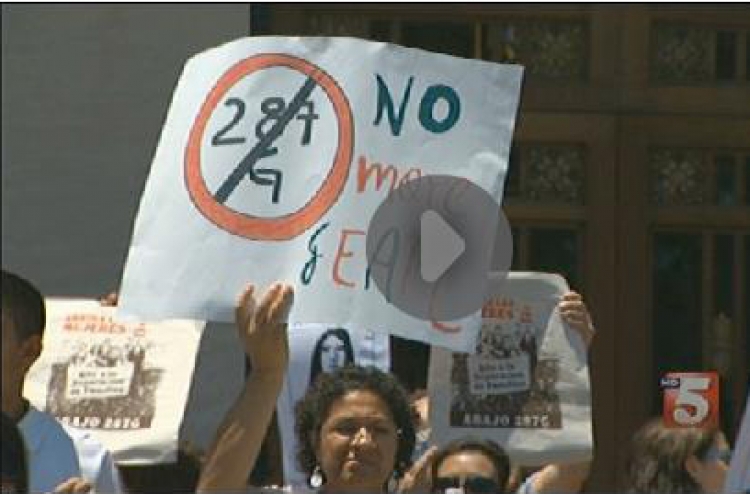 Left – This is a protest in Tennessee where the banner workshop participants created was used, along with a design organizers made with one of Melanie’s image. Right – Posters created by Karla at the Action Camp being used in the same protest.


The Art Track had daily workshops broken up by disciplines, some people jumped around and tried different things, others focused on learning one thing. The first day opened up with a series of exercises that helped take people through the steps in creating a poster design, including one that helped people learn how to transform ideas and concepts into “people sculptures” that were photographed and stylized in Photoshop and used in poster designs. This lead to the group working together to design a poster, which was one of two posters printed that was distributed at a Anti-287G rally in Tennessee just a few days later. It was really great to see all the art created by the Arts Track; posters, banners, flags, stencils, paper mache masks and a script for a teatro piece that can be used by other in the future. 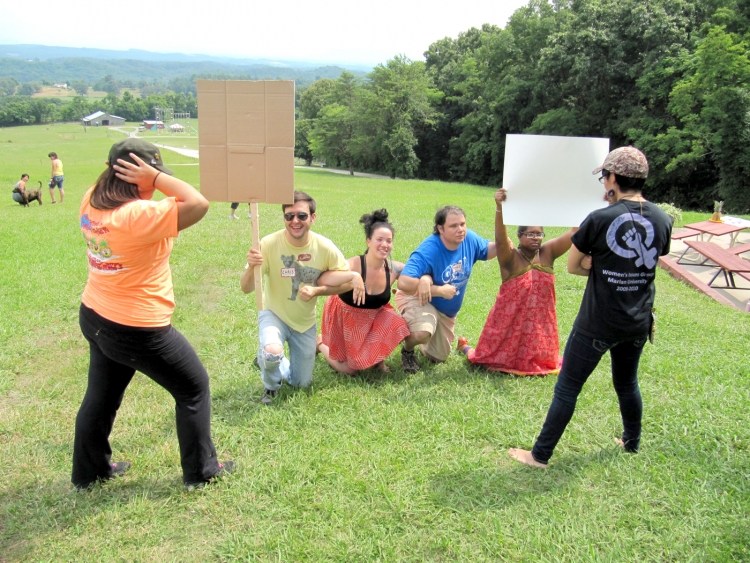 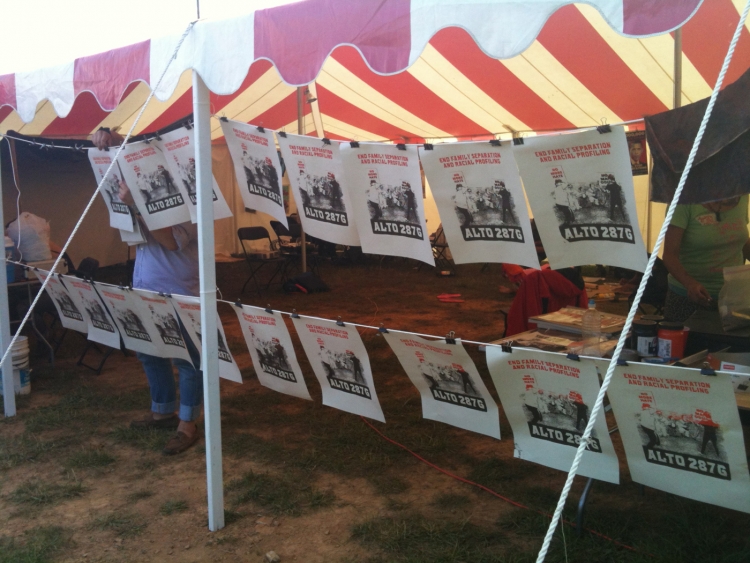 Left – This is a photo taken during a workshop where particpants learned to “stage” concepts and take photos to use in their posters, this photo was used in an anti 287G poster. Right – These are the anti 287G posters being printed in the poster workshop in which the photo to the left was used.

In the screen printing workshop participants worked on designs that they started the first day of Art Track where participants split up into small groups in which they developed sketches for posters about the issues that their organizations are working on. The participants took their designs from the sketch phase to digitizing their artwork and producing films at the local Kinkos. We did not have a fully equipped studio available to us so we exposed our screens using the sun light as opposed to a light table, this worked perfectly the first day but the second day it rained which made it a little more challenging but in the end we exposed five screens. Left – Screens that were exposed using sun as a light source. Right – Sandra and JoJo helping someone learn to make some posters. 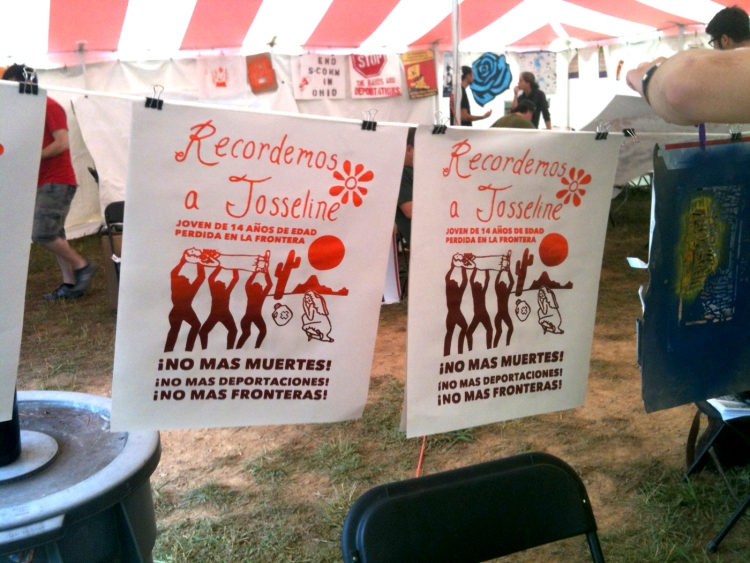 Left – Posters made to to support migrant rights and to demand an end to family seperation. Right – Posters made in memory of Josseline, a 14 year old girl who died in the desert while crossing the border.

Participants also learned to make stencils using Contact sticker sheets, the designs were traced on the sheets and cut with xacto blades and then affixed onto the screen. This is a quick way to reuse a screen by applying the image onto the screen like a sticker and once printing is done the sticker could be taken off and a new design can be used. We also had time to make some t-shirts, taking some of the screens we created we were able to make shirts for most of the camp. 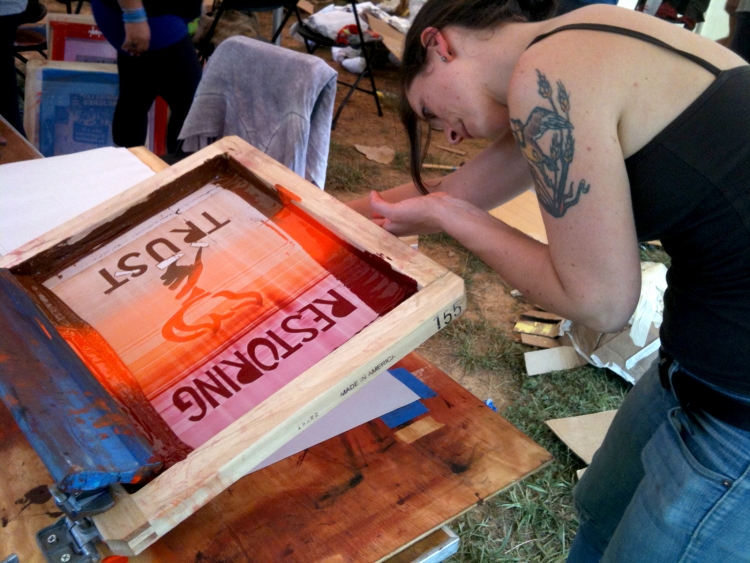 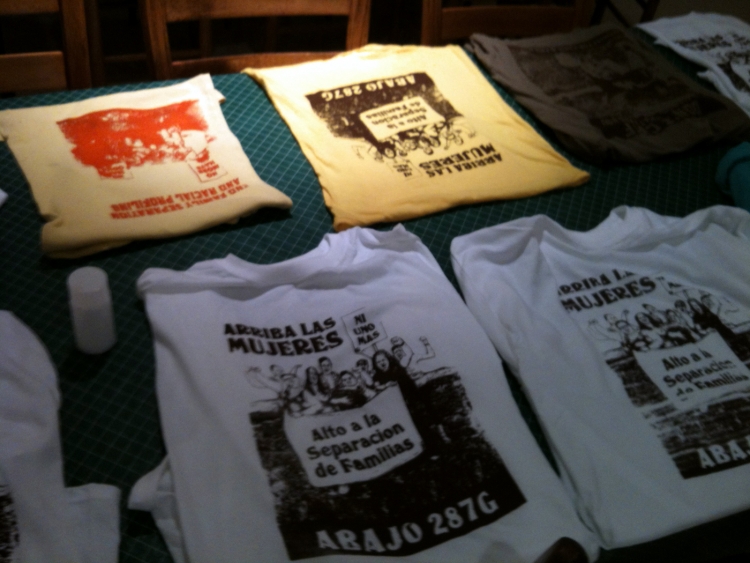 Left – Poster being printed using a Contact paper hand cut stencil with a a three color blend. Right – t-shirts that were produced on the last night of the camp by members of the arts track.

One of the things that was good to see in these workshops was how people can work together, a group of five people making t-shirts or three people working together to print posters, people making puppets or working together to write a teatro script, it was all very inspiring. I hope that people will take what they learned here and apply in their communities, because art and culture is a very important part of community organizing and brings people together.  There was so much knowledge shared by the trainers, I felt really lucky to be part of this historic training.