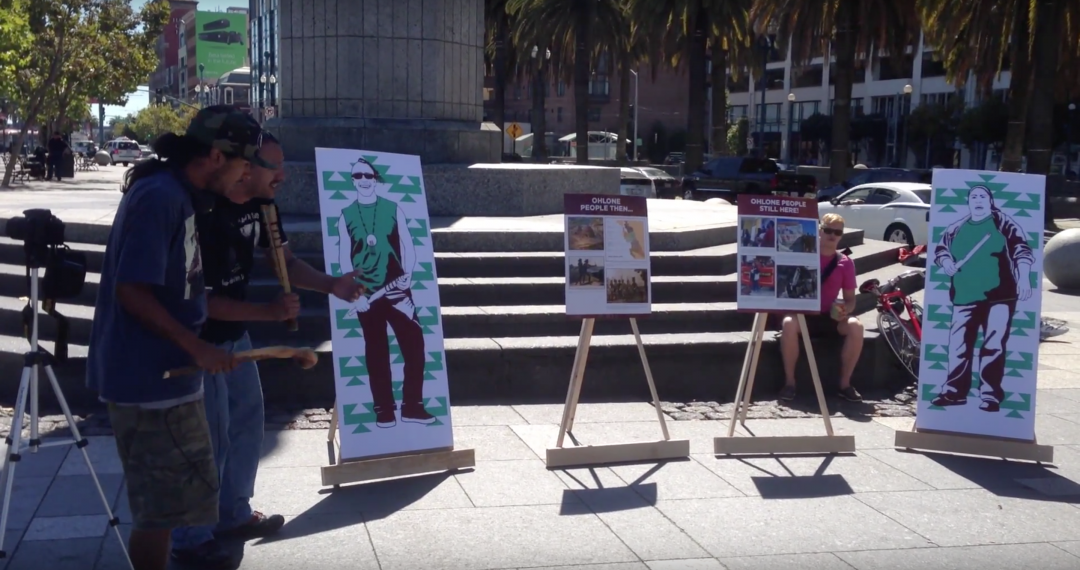 This fall I started an MFA in Social Practice at California College of the Arts, it has been a big departure from working full-time as an artist and having the freedom to create what ever I wish. Working within this new context is helping me think of new ways to explore themes that have been part of my work for some time now. This was the first project for my Social Practice Workshop and was part of a group exercise which took place on Market Street in San Francisco. My part took place at Market and Embarcadero, my aim was to  start our walk with a ceremony to give thanks to the ancestors and acknowledge that we are on Ohlone land. I created two large format screen prints of Ohlone community members who have been part of contemporary social movements to defend Ohlone burial grounds. Along with the prints were two informational posters, one with some history about Ohlone people and their land base and a second with information about modern day land struggles that Ohlone’s are facing.

This is not a public service announcement,, this is a challenge to your preconceived notions of where you stand. This is not the United States of America, this is Ohlone Land, and since time immemorial this has been Indian Land[1] and it will always be. The landscape has changed over time, in the past 245 years the Ohlone villages that existed here have been replaced by cities. But the people have not been replaced they continue to exist. Ohlone songs continue to be sung, some songs as old as time, some as new as this mornings rising sun the people continue singing.

Images of Indigenous people in the media have stayed static for too long, society imagines Indigenous people as the stereotypical stoic Indian of yester year. But this is not the case, Indigenous people have changed with the times, today they wear jeans, t-shirts maybe a blazer and sneakers, sometimes they wear traditional clothes still with sneakers but more often with moccasins. There is no one-way to define what a contemporary Indigenous person looks like today, like the trickster they take many forms.

Today Ohlone people fight to protect their lands from desecration, fighting to stop the building of parking lots and shopping malls on burial grounds, fighting for Tribal recognition and to keep their languages alive. At the heart of this struggle are always ceremony, prayer and songs to give thanks to those who came before us and ask for strength to keep fighting.

[1] Slogan taken from graffiti painted during the occupation of Alcatraz that declared the Island to be Indian Land. This is a slogan that continues to be used today to affirm indigenous people’s right to