Jesus and I are great fans of Rebel Diaz and see them as allies in the cultural work that is at the heart of a movement for social justice. Please get the word out and call to the 41st Precinct. If you are in New York please make the effort to show physical solidarity with these cats – melanie 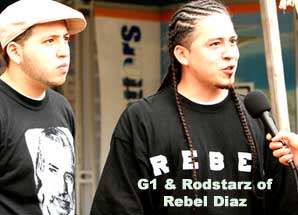 Looks like the NYPD are living up to their reputation of being bonafide ‘dipshits’. We are just getting word that NYC Police located in what was once known as Fort Apache-the 41st Precinct in the Bronx, have shown that police terrorism is alive and well.

The word is in an unprovoked attack they badly assaulted two   members of the Rap group Rebel Diaz.

The story we are hearing is that group Rodstarz and G1 were up in Bronx on Southern Blvd in Hunts Point, when they noticed the police were harassing a street vendor who was selling fruit. The two went over to witness the cops in action and when they saw the police being abusive they pulled out a cell phone to video tape the incident and asked for the officers badge numbers. Keep in mind that part of the Bronx has a large immigrant community and it is also being gentrified. The police from the 41st Precinct have made it a point to commit acts of terror including the shooting and killing of an unarmed immigrant man last year. The case brought up images of Amadou Diallo, another immigrant who was gunned down by out of control Bronx cops in the neighboring precinct.

According to witnesses, when Rodstarz and G1 asked for badge numbers the police became agitated and turned around and started beating them with bully clubs and kicking them in full view of other vendors and people on the crowded street. The two were dragged off bloody, put into a police car and charged with resisting arrest and assault.

The backdrop to this story is that Rebel Diaz are not your ordinary rappers. They are well known activists who not only speak out against police terrorism, but have been key in helping out folks within this immigrant community. Hence it would not be usual for group members to bear witness and to speak out against the injustices. Rebel Diaz has committed themselves to given voice to the voiceless in that Bronx neighborhood.

Many feel that the assault by these cowardly Bronx police officers in plain view of everyone was a way to send a strong message to folks in the community that the police run things and they best stay in line. By beating the Rebel Diaz members in front of everyone, it was a way to spark fear and remind people that no one is safe from the police. They wanna let folks know that they can brazenly beat up popular rappers in front everyone even with cell phone cameras rolling and do so with impunity. The whole ordeal is akin to the slave masters from way back sparking fear in the hearts of other slaves by beating the strongest among them in front of everyone for all to see.

Over the past year NY Police have been man handling, arresting and terrorizing politicized Hip Hop artists, activists and news reporters.

For example, last year in Brooklyn well known attorney Michael Tarif Warren who routinely represents people in police abuse cases was badly beaten along with his wife when they stopped to watch and bear witness to NY cops terrorizing a unarmed tennage boy at a gas station.

During the protests immediately following the acquittal of the officers on trial for the Sean Bell shooting, journalists who had been speaking out against the police were harassed and roughed up.

Hopefully folks will read this and understand that what the police are doing will not work.. A police state will not take place on our collective watch..

ALL OUT TO PROTEST THE 41ST PRECINCT!!!!

take the 6 train to Longwood