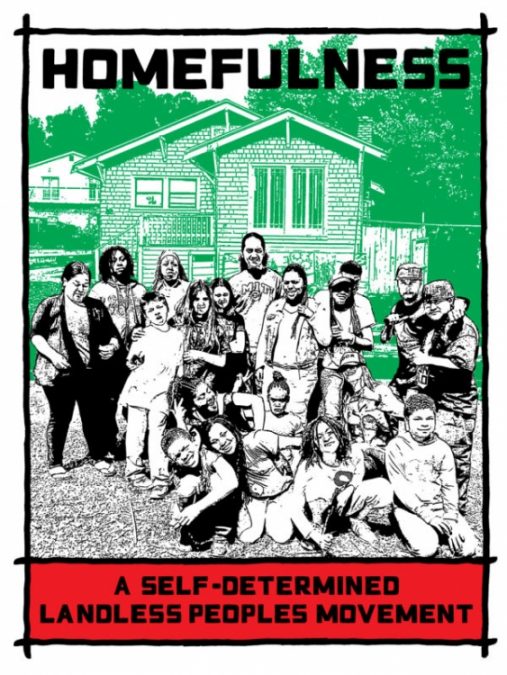 On the fourth of July weekend while many people were celebrating Independence day, the folks at Homefullnes in East Oakland, California were celebrating their interdependence. A group of Black, Brown, Houseless and Indigenous Peoples came together to demonstrate their Self-Determination in what they call Deep East Huchuin on BlackArthur (AKA East Oakland) with a community ground-breaking ceremony for their solution to houselessness. I was there a couple years ago when they first revealed their plans for building what will become a multi-home land base where people who have found themselves without a home and land. Being there, at their land where they are working towards created an autonomous space reminded me of the Zapatistas and the struggle they have maintained over the past three decades.

I first learned about the Zapatista uprising from my older sister in the spring of 1994 and it inspired me to imagine a world where indigenous people could take back their land. The Mayan uprising started on New Years 1994, the day that the North American Free Trade Agreement went into effect and terminated Article 27 of Mexico’s constitution that protected Indian communal landholdings from sale or privatization. NAFTA was also responsible for relaxing environmental policies having a negative impact on Mexican farmers who could not compete with the cheaper selling imported corn from the United States. Learning about the Zapatista movement changed my life and helped politicize me, teaching me to be grounded in collective struggle and to think about what it means to create a new, more egalitarian world. I was a senior in high school at the time and learning about Third World revolutionary movements from the 1960s and felt that revolutionary armed struggle would never happen again and was a thing of the past. Learning about the Mayan rebellion, gave me a new understanding of the world and helped me realize that, as the Zapatistas were affirming, another world is possible.

After failed negotiations with the Mexican government, the Zapatistas shifted focus and began taking over colonized land and building autonomous communities. In the early 2000s the Zapatistas stopped making demands on the government and created 5 autonomous Caracoles (Snails) with a form of horizontal self-government or “buen govierno” (good government) as they describe it. Their plan was to provide their community with the basic necessities for living, from land and food to education and health care. Through these Caracoles the Zapatistas organized health clinics, schools, community banks and independent media projects and each has its own autonomous health clinic and primary and/or secondary school. These actions inspired the people to imagine a world in which indigenous people take back their lands, as the Zapatistas did and. This idea of autonomy in the Xican@ community has manifested in different ways, I remember going to Regeneración, a cultural space in Highland Park during the mid 1990s where Zapatismo was a guiding principle for the space. For Melanie Cervantes and me, it inspired us to create our collaborative Dignidad Rebelde, named after a phrase the Zapatistas made popular in their communiqués that emphasized the dignity they were taking back through their movement that inspired our use of temporary autonomous spaces where we come together with community and make art for the people.

Recently in East Oakland Poor News Network (PNN) moved in the direction of the Zapatistas and their experiment with autonomy and bought a small plot of land with a duplex on it. The name of this space is Homefulness, the house and land both needed some work but it was great start but most importantly the plot of land is big enough to expand on. The property was purchased through an equity campaign that raised $134,000, providing the funds to purchase the land. The equity campaign was seen as an alternative to a capital campaign, the difference being that through equity sharing the people who put their labor into Homefulness will be the ones who are able to benefit. Operating as a sweat equity project they strives to provide permanent co-housing, education, arts and social change projects for houseless and formerly houseless families and individuals. Their hope is to create a permanent and lasting solution to houselessness for families in poverty who have been displaced, evicted, gentrified and destabilized out of their indigenous lands and communities.

Hearing about these projects reminded me of the Caracoles the Zapatistas have built. I had the opportunity to visit Homefulness during the ribbon cutting ceremony on March 6th, 2014, when they officially unveiled their plans for the land and threw a party to celebrate. Tiny (one of the main organizers of the PNN) gave me a tour of their land and told me the history of the process they went through to acquire the land. She showed me garage they were in the process of transforming into a Single Room Occupancy (SRO) for Joe one of the PNN members. Tiny explained to me the process they were going through to build a series of 4-10 permanent housing units on the property. This is a way to make the most of the relatively small piece of land of building to create a community where poor folks are able to have a place to call home.

One difference between PNN’s Homefulness and the Zapatista Caracoles is that in hopes of creating something long lasting the group opted to buy a property rather than just take over or a piece of land that could be potentially taken away destroying all the work the group invested. This is something that has happened to other groups, such as the South Central Farm in Los Angeles where community members came together on a piece of land to create a community garden and grow food for the people. But they were displaced by the landowners and had to move outside of the city to continue their project. Through the “legal” acquisition of the property Homefulness is trying to avoid this kind of situation and any confrontation with the authorities. Still, like the Zapatistas, PNN understands the relationship Homefulness enters with the government as landowners, something that under the current system of governance cannot be avoided in such a project. At this point in time, taking over land and declaring autonomy is not something that is entirely possible to sustain over a long period of time, so PNN decided to create Homefulness as a way to have an autonomous space that can survive under current political conditions. I think of this as “inching” towards another way of relating to the U.S. government, as I read in one piece I found on their informational board:

“We also imagine this as a first step, this inter-generational council will respect its elders so that leadership…will be returned to our indigenous communities of color like those of East Oakland to improve our situation and stop our dependency on the Capitalist system…Instead we look to a system based on self-determination and the power of responsible indigenous communities.”

This then is one of many steps toward creating a completely autonomous community, something that has no legal connections to the U.S. government. Creating a place where people are able to exercise their right of self-determination as they decide their future. This is the dream for many indigenous people throughout the Americas, to have a place where they can determine their own future and be responsible only to themselves. This Autonomy is something that the Zapatistas have been experimenting for 11 years now and started sharing in 2013 through their Escuelitas in Chiapas where they have been inviting organizers, artists and educators to share what they have learned. Seeing what Homefulness is doing in East Oakland inspires me, it gives me hope that one day we will have many of these communities throughout Turtle Island.