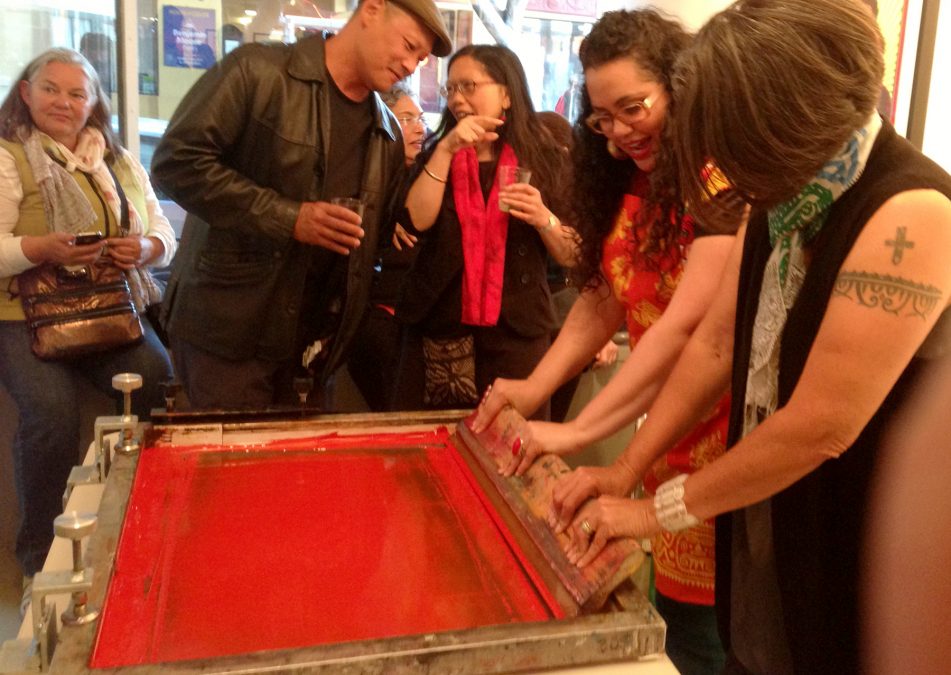 As part of the Taller Tupac Amaru’s 10th Anniversary Empujando Tinta exhibit at the Galeria de la Raza we decided to publish prints by various artists in the community including Malaquias Montoya who designed the poster for the exhibit and Nancy Hom whose design we printed to promote this years Carnaval. For the closing of these exhibit we invited three artists to collaborate with us and produce a limited edition screen print. These three artists are, Viviana “Viva” Paredes, Favianna Rodriguez and Rio Yañez. Favianna is a member of the Taller and I have worked on numerous prints with her, but this was the first time we had the opportunity to work with Viva and Rio whose work Melanie and I have admired for years.

Viva’s works mainly with glass sculptures which deals with issues of curanderismo and sacred medicines, her bio mentions “Viviana continues her grandmother’s tradition of healing by creating artwork that explores the sacred space of ancestral memory, culture, and linguistic history”. In the past we have seen work in a couple galleries and fell in love with the way she used traditional objects and medicines as part of her art to show the importance of these things in our culture and show how these objects are sacred when used in everyday life or as art objects. 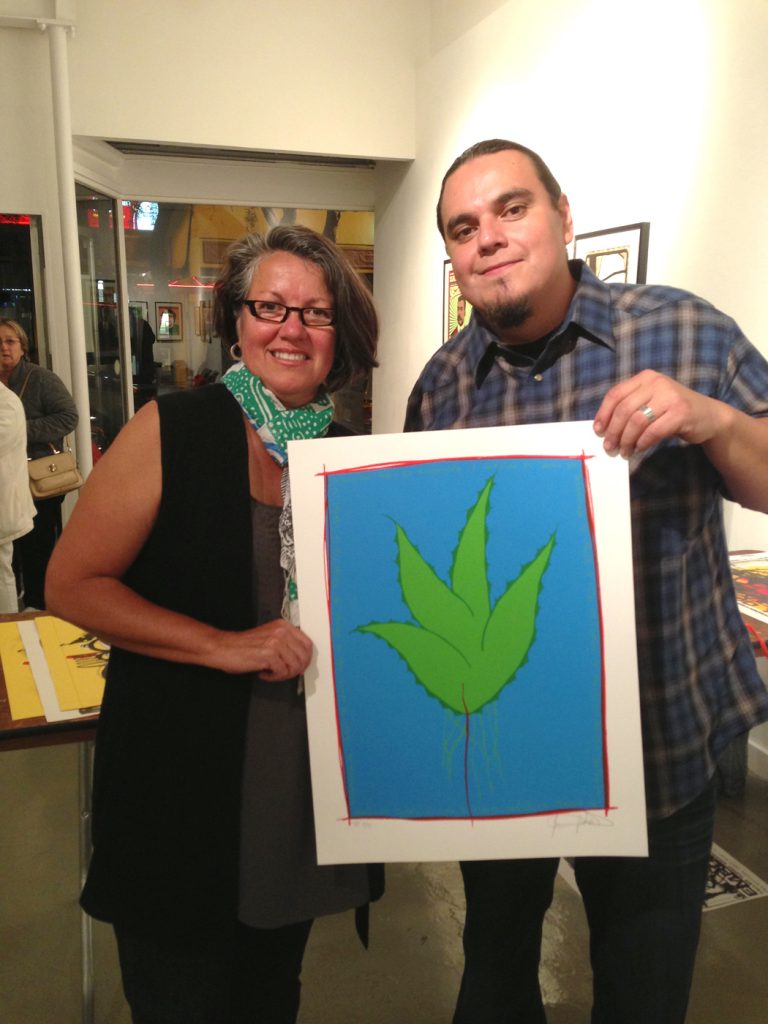 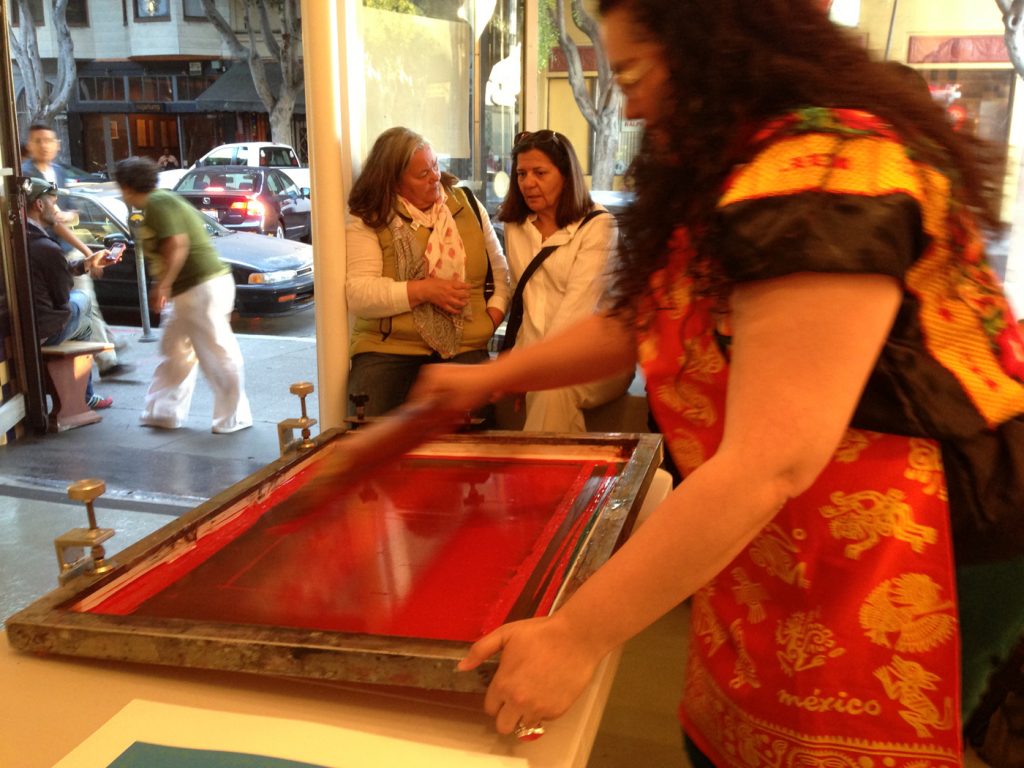 Me and Viva with the finished print. | Melanie printing the last color on Viva’s print.

This piece was printed completely at the Taller with Rio there to help with the process, helping pick and mix the colors used. We had some help from Karla Gomez-Pelayo who helped me a few times over the summer to learn more about the printing process. It was a lot of fun in the studio, it was a super hot summer day but we made the best to it. Here is what Rio wrote about the piece: Ghetto Frida: The Ouroboros is a nostalgia piece dedicated to 90’s culture in the Mission District.  Front and center is a bootleg Bart Simpson t-shirt, to me the most universal signifier of youth culture in the neighborhood in the early 90’s. An era where countless stores lined Mission street displaying these bootleg Bart shirts on their awnings as if they were patriotic flags. The lyrics used in the scroll are from Ahmad’s “Back in the Day” the greatest sentimental hip-hop song of all time. 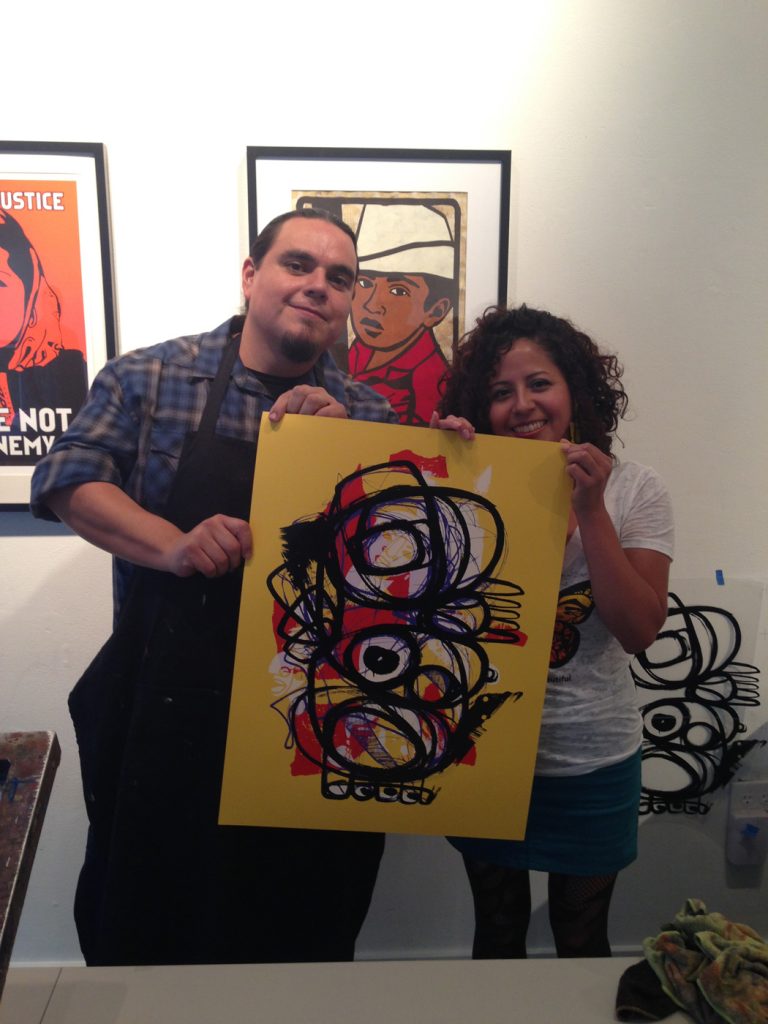